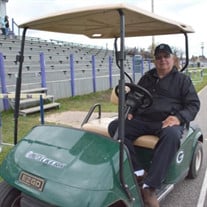 Chuck lived in Brimley, Michigan, until the 9th grade when his family moved to Pickford and Chuck began attending Pickford High School. It was there that he met his soulmate and high school sweetheart, Mary Jane (Storey) Bennin. He also brought along his friend, Frank Livingston when he made the shift to Pickford High school and the two graduated in the same class of 1966. During those high school days, Chuck carved out an athletic legacy for himself.

Chuck was the guy that was active in all sports and excelled in everything he played. He was on the 1965 Pickford Basketball team that played in the State Semi-Finals where he was named to the All-Tournament team. He continued playing sports after school including Men’s Slowpitch Softball and Golf. He was well-known as a “homerun” hitter in softball and was walked by many. In Golf, he had a hole-in-one at the St. Ignace Golf Course during a scramble he was playing with his good friend Neil Peffers. Through the years Chuck coached several Jr. High teams and the Varsity Boys Basketball team. He led three different teams to Regionals and coached the 1992 team that played in the State Semi-Finals. He then moved into being the Athletic Director at Pickford Schools. He enjoyed working and being around kids every day. He put in many hours at the school and wouldn’t have changed any of it. He was part of starting the Jr. High Football tackle program. He also created the softball field with help from many others and brought back the old baseball field so both programs could get started at PHS. Chuck always said “Nothing would be possible if he didn’t have the many volunteers that he did to run and work at all the sporting events. Your program is only as good as the people to volunteer to help.” After his retirement in 2019, Chuck was honored during the Pickford Hay Days program by Pickford School for his many years of work and dedication. He was also the Grand Marshall for the Pickford Hay Days Parade. Between his coaching and working as the Athletic Director he has 38 years of service at Pickford Schools.

While being the Athletic Director, Chuck also got involved in doing some broadcasting. He played a role in bringing back the “EUP Game of the Week” and would occasionally help broadcast those games when needed.

Chuck was also the Recreation Director for Pickford Township for many years. He was instrumental in the developing of the Glen Gough Memorial Park by building the Pavilion/Ice Arena, Restrooms, Softball diamond and dugouts, playground, and camping sites. Chuck was someone who truly loved his community and always advocated in ways to better serve his community.

In addition to his sports, Chuck also worked for the UPS for thirty years. He was able to meet and touch the lives of many different people. He was always a “people” person and would always have a story to tell by the end of the day. After retiring from the UPS, he went on to work as the athletic director for Pickford.

When Chuck had some free time, he loved watching sports and was a avid Packers and Tigers fan. He also loved to go out camping and hunting for deer. Chuck loved to turn events into friendly competitions as well; if you went out hunting with him, chances where you would end up seeing who could get the biggest buck. He also enjoyed his scratch-off lottery tickets and playing poker with the guys. Chuck loved life and likewise, life loved Chuck back. He gave so much of himself to those around him; Chuck leaves behind many who will miss him.

There will be Calling Hours at the Presbyterian Church in Pickford on July 15, from 3:00 PM until 6:00 PM followed by a Memorial Service beginning at 6:00 PM.

In lieu of flowers, the family asks for donations to Kirk Gibson Foundation for Parkinson’s, 19798 Mack Avenue, Grosse Pointe Woods, MI 48236; Pickford Presbyterian Church, PO Box 266, Pickford, MI 49774; or Mary Jane Bennin, PO Box 255, Pickford, MI 49774 for a fund for the purchase of a scoreboard for the softball field at Pickford Schools. Mary Jane will oversee the purchases of the scoreboard.

The family would like to thank Dr. Thilak Chander and Dr. Vishnu Chander for all the care during Chuck’s illness. Also, thank you to the staff at War Memorial Hospital for the wonderful care he was given while he was there and to the WMH Rehabilitation Staff for the exceptional care he was given in the hospital and during his home therapy visits.