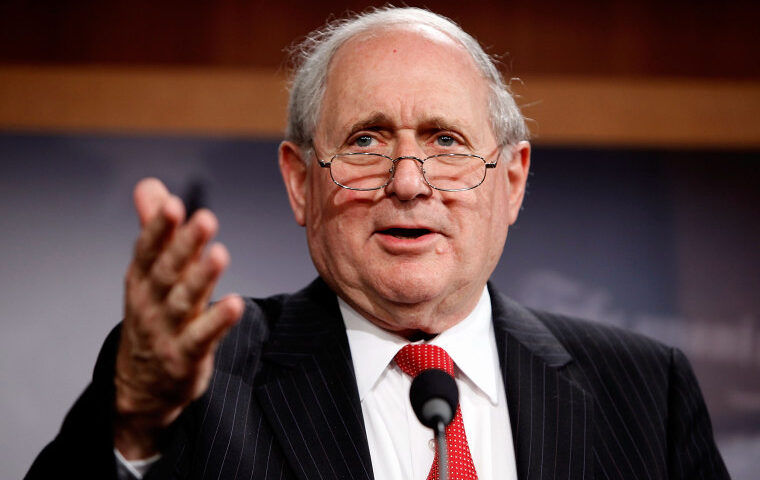 Carl Levin, Michigan’s longest-serving U.S. senator who died Thursday at age 87, was remembered by family and friends as a man who personified integrity.

U.S. Rep. Andy Levin, D-Bloomfield Twp., said his uncle always put the public good above self-interest and was  honored by the trust the people of Michigan put in him.

“Uncle Carl met with more presidents, kings, queens and other important people than all but a few of us ever will. But he treated them all the same as he did a Detroit autoworker or a beet farmer in Michigan’s Thumb – with a full measure of dignity but no airs, ever ready to puncture self-importance, posturing, mendacity and avarice.”

Levin said despite his sober demeanor, his uncle had a sense of humor.

“In truth, he wasn’t unfun,” Levin said. “In fact, he often pierced tense situations with self-deprecating humor, and he privately shared incisive observations about others with staff and colleagues.”

Here are some other reactions to Levin’s death:

“When I first began serving in Congress, I would often seek Senator Levin’s advice. His guidance was especially important to me as I succeeded him in the U.S Senate. He was not only a mentor – he was a personal friend, who I looked up to as an extraordinary public servant. Sen. Levin would always extend his hand to get things done for the betterment of our country – and today’s Congress would do well to follow his example of commonsense problem-solving.”

“Sen. Carl Levin was a champion for truth and justice and a tireless advocate for the people of Michigan. He always believed that our government could be a force for good, and he spent his career showing all of us how it’s done. Sen. Levin was also my friend, and it was truly an honor to represent Michigan alongside him for 14 of the 36 years that he served in the Senate. Michigan was so fortunate to have him fighting for us. My heart goes out to his beloved Barbara, his brother and best friend Sandy, his nephew Andy, his wonderful daughters and all of his family.”

“Carl Levin was a champion for Michigan. His 36-year tenure in the U.S. Senate, the longest in state history, was marked by a tireless commitment to our auto industry, Great Lakes, and men and women in uniform. Carl paved the way for a safer planet, helped pass several nuclear weapons and missile treaties, and spoke out courageously against entering the war in Iraq. He made Michigan a safer and better place for our families, securing funds to create the Detroit Riverwalk and writing the bill that established Sleeping Bear Dunes National Park. Carl would often wear his glasses on the tip of his nose, but he saw the best in us. He saw what we were capable of when we came to the table as Michiganders, as Americans, to get things done.”

“I was deeply saddened to learn of the death of Michigan’s longest serving U.S. senator, Carl Levin. We lost a true statesman tonight … Sen. Levin was first and foremost a dedicated family man. He will be remembered as a champion for civil rights, for his protection of the US auto industry, and for securing critical funding to begin the redevelopment of our internationally acclaimed Riverfront. His legacy will live on forever in the hearts of Detroiters.  My heart goes out to his family at this difficult time.”

“Our state has lost a giant who will forever serve as the gold standard of public service. We have been blessed by a tremendous brother team and my deepest sympathy goes out to Sandy, Carl’s wife Barbara and the entire Levin family.”

“For 36 years, UAW members didn’t have just a senator, they had a friend in Carl Levin. He was a strong, caring, deeply committed individual who never forgot the working families of Michigan and this country.”

“Carl was one of the most decent human beings to walk the face of the earth. He was John Dingell’s best friend and partner in Congress. He was a steadfast leader who always stood up for what was right and knew every ounce about every issue. His contributions in Congress and in his Michigan community live on to this day and have impacted so many hardworking American families.”

“In his fifty years serving the people of Michigan, Senator Levin was revered in the Congress and country for his commitment to the public good. He was a leader committed to justice and accountability at every step, from the campus to the courtroom, the city council to the Congress. As chair of the Senate Armed Services Committee, he brought principle and patriotism to his work, understanding that America’s strength is found not only in our military might, but in our faithfulness to our values. His respect for the dignity of all people embodied the best of America.”

“An icon. An innovator. A fighter. A true and genuine public servant. No matter how busy he was, he was engaged and attentive. Whenever I contacted him for help and assistance he met with me, not his staffers, whether it was in D.C. or Detroit. There was no one one like him. I send my condolences to his family. May he truly rest In peace.”

“For over fifty years, I have known Carl Levin as a friend, a colleague and a leader of the important issues of our times. He was much more than Michigan’s longest serving United States senator. For all those five decades he has been totally devoted to the public interest and public good. From fighting to protect Detroit’s neighborhoods, to being a champion for a strong and thoughtful national defense, Carl Levin has been a role model for those who seek to serve the public. His work in Michigan on civil rights, his advocacy in Washington for peace in the world and jobs here at home was tireless.”

“As an 18-year-old just elected to local office, Carl Levin was my political idol. I remember writing him and Carl graciously responded by setting a meeting between the two of us. I have vivid memories volunteering on Carl’s first campaign for Senate in 1978. I looked up to Carl then the same way I do today. Never did I imagine years later I would get the privilege of serving with Carl in the United States Congress… (He) was a master legislator and giant in the United States Senate.”

“Today, we mourn the passing of U.S. Sen. Carl Levin. He was an advocate for Michigan, Detroit and the auto industry. An early and fierce champion of equal rights, he demonstrated kindness and integrity through his life of public service. Our thoughts are with the Levin family.”

“I was saddened to hear of the passing my friend Carl Levin. During our time together in the Senate, we worked together to promote the interests of our neighboring states… Carl served as my predecessor as chair of the Permanent Subcommittee on Investigations, and we shared the same commitment to rigorous and bipartisan congressional oversight of our federal government on behalf of the American people. Carl built a legacy serving the people of Michigan that will endure.”

“Senator Levin served the people of Michigan for many years and he devoted his life to service. He was held in high-regard by Republicans and Democrats, and he will be long-remembered for many achievements, including his strong oversight of the federal government. My prayers today are with my colleague Andy Levin and the entire Levin family as they mourn their loss and celebrate Senator Levin’s legacy of accomplishments.”

“Carl was a friend whom I have known my entire career. He worked tirelessly for the people of Michigan and the auto industry.  As he championed environmental leadership he encouraged me to do the same. Carl was a model of service, decency and integrity — holding us all to a higher standard.”

“Carl Levin was always solid as a rock as we worked together, side-by-side, for 16 years representing Michigan in the U.S. Senate. This is a very sad day. Carl was tough, smart and independent — and we need more like him.”