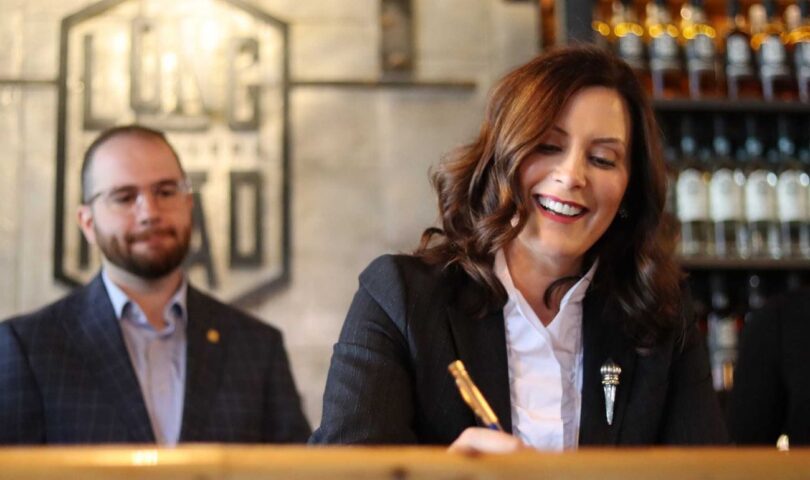 “We’ve got an opportunity to make some investments in ways that really lift people up, help small businesses and help us get back to normal,” Whitmer told reporters in Grand Rapids Thursday.

The proposal is part of Whitmer’s Michigan Economic Jumpstart Planunveiled at the event. The total price tag is $1.15 billion, paid for from a combination of federal COVID aid and a strong state budget surplus. Besides raising wages, the money would also be used to offset the cost of childcare and help small businesses cover part of their operational costs.

Part of the money, Whitmer said, could be taken out from the state’s $3.5 billion surplus fueled by federal stimulus aid.

To raise wages, Whitmer said the state will use the money to create grants for businesses to cover the difference between the current salary offered and the proposed $15 an hour favored by Whitmer and Democrats but is generally opposed by Republicans and the business community.

The Whitmer wage grants would last three months, and participating businesses would have to pledge to retain the employees and the wages for at least three more months after the grant period ends.

Businesses that break their promises would have to return the money, Whitmer said.

“No one should work a full-time job 40 hours a week, and still struggle to take care of their family,” Whitmer said. “We can help Michigan’s businesses raise wages and attract more applicants for open positions.”

Whitmer’s plan would devote another $120 million to Michigan Reconnect, a scholarship program that helps pay for the community college tuition of residents 25-years-old and older, and $60 million to the Future for Frontliners program, which provides frontline workers in the COVID-19 pandemic who lack college degrees “with tuition-free access to local community college to pursue an associate degree or a skills certificate, either full-time or part-time while you work.”

“By bumping up pay, and increasing educational and skills opportunities for workers, we can entice more people back into the workforce, and to increase our labor participation rate,” Whitmer said Thursday.

Currently, the state’s labor participation rate is lagging at 58.8 percent, ranking Michigan 48 in the nation.

Many of the initiatives presented by the governor — including a $370 million investment to increase access to low-cost or no-cost childcare by raising the income eligibility threshold from 150 percent to 200 percent of the federal poverty line, temporarily waive out-of-pocket copays, and grant a 10-percent increase in hourly pay for child care providers — would utilize one-time funds from federal aid received throughout the pandemic.

Federal help and a raise in consumer spending on goods have helped the state reach a budget surplus of $3.5 billion, far beyond what had been estimated in January.

The GOP legislature will have to approve the proposals before they become a reality, and whether they would agree to do so remains unclear.

“We must wisely and effectively use this once-in-a-lifetime funding for purposeful and lasting projects that improve our state for every Michigan family,” Stamas said in a statement last month. “We also need to be guarded with new spending programs.”

Stamas said federal relief money is helpful to “support people, businesses and communities affected by the pandemic,” but he warned that “it’s not sustainable.”

Whitmer said Thursday her plan to raise wages will only last six months, and that market forces will drive what happens after. It’s a gambit that appears to rest on the notion that once workers begin to receive higher wages it becomes more difficult for businesses to return to lower pay levels.

“I know that there’s a lot of rhetoric that comes out of the Capitol, but these are permissible uses of these dollars,” Whitmer said. “Unlike some of the proposals that have come out of the Capitol, we can actually do this with these resources and think that this is a great way to support people and support families and help small businesses.”