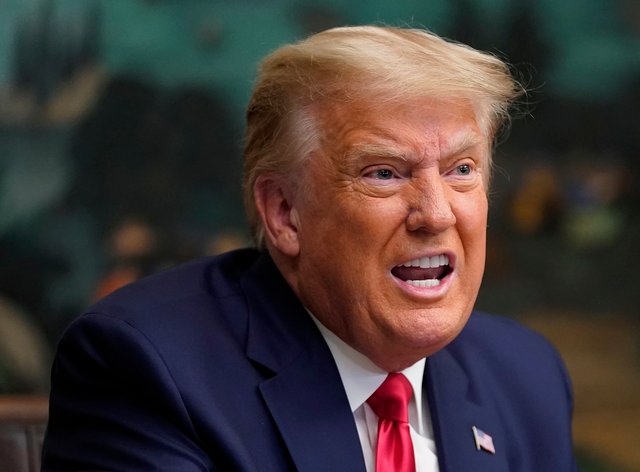 LANSING — Former President Donald Trump lashed out at two GOP Michigan state senators Thursday, one day after a Senate committee report refuted his claims that fraud impacted the results of the November 2020 election in Michigan.

In a statement released through his “Save America PAC,” Trump said that Senate Majority Leader Mike Shirkey, R-Clarklake, and Sen. Ed McBroom, R-Vulcan, the senator who headed the election investigation, “are doing everything possible to stop voter audits in order to hide the truth” about what happened.

“The Senate ‘investigation’ of the election is a coverup, and a method of getting out of a forensic audit for the examination of the Presidential contest,” Trump said.

A report released Wednesday of an investigation by the Michigan Senate Oversight Committee found no basis for claims by Trump and his allies that there was widespread fraud in the 2020 election.

“The committee found no evidence of widespread or systemic fraud in Michigan’s prosecution of the 2020 election,” the report states.

“Citizens should be confident the results represent the true results of the ballots cast by the people of Michigan.”

Trump’s unfounded allegations of election fraud in Michigan have largely focused on Antrim County, a heavily GOP area that Trump won easily but where programming errors by the local GOP clerk briefly caused unofficial results to show Democrat Joe Biden to have won the most votes. Claims of fraud in Antrim have been rejected by election equipment experts and a hand count of all paper ballots upheld the official results.

Trump’s statement also singled out Detroit as “the most corrupt election city in the U.S.” and repeated earlier refuted claims related to the vote count there. In fact, Trump did better in Detroit in November than he did in 2016 against Democrat Hillary Clinton.

He urged voters to call the offices of Shirkey and McBroom and “get them to do the right thing,” or “vote them the hell out of office.” Shirkey is term-limited. McBroom, who chairs the Senate Oversight Committee, is not.

Trump supporters have been calling for a “forensic audit” of the election results. The state has already conducted audits provided for under the constitution, as specified in legislation approved by the GOP-controlled Legislature.