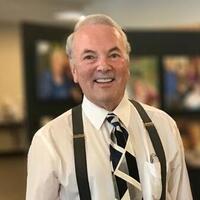 Thomas Christian Lehman passed away unexpectedly at his home in Sault Ste Marie, Michigan on Monday, May 24, 2021. Tom was born on May 16, 1950 in Long Island, New York to Dr. Robert J. and Ruth (Severns) Lehman. Tom was preceded in death by his wife of 47 years, Debra Halling Lehman. He is survived by his three children and their spouses: Chris (Anne), Amanda (Paul), and Betsy (Kedzie), his grandchildren Julie, Emma, Sidney, and Dexter, as well as his dear adventure partner, Lori Anderson.

Tom moved to Louisville, KY where he grew up in the Cherokee Park neighborhood with his sisters, Jennifer, Rebecca, and Celeste. Like his father, he achieved the rank of Eagle Scout. Tom graduated from Atherton High School in 1968, and enrolled in Washington State University where he had dreams of being a Park Ranger. There at WSU he met Debbie, his free-spirited “pioneer girl”.  With the Vietnam War still going, Tom switched to studying Dentistry to stay in school, leading to a 40 year career in which he would improve the lives of thousands of people with his skill and easy going demeanor.

Tom and Debbie moved several times throughout the country, having a child in the 70s, 80s, and 90s along the way. They called Pullman, WA; Louisville, KY; and Devil’s Lake, ND home before finally settling in Sault Ste Marie. In a little house on a dead-end dirt road 14 miles outside of this small town, they all enjoyed a fairly idyllic country life among the Person and Lampton families, holding great firework parties and tractor-pulls. Tom started his own dental practice in Kinross, becoming a fixture in that community as well. The 14 mile Road adventure would last for 11 years until they decided to be closer to town.

Tom never stopped learning. He was always reading a book, at least three magazines, and the newspaper, while also listening to the radio and a recorded college lecture at the same time – and taking notes on things that came up to look into further later. He enjoyed keeping up with the latest advances and literature in dentistry, and frequently took up new skills outside of his career like playing the cello, square-foot gardening, and sailing. To further this interest, he helped found the St Matthias Guild with Tom Marshall and Tom Cox, and together with Joel Lake and many others, they would build and restore canoes, kayaks, and boats. He also had the fancy title of Commodore of their annual Regatta. Tom pursued his love of singing by joining a Barbershop quartet, singing in both Sault Michigan and Sault Ontario as the tenor in the quartet Four-in-Exchange. He also sang in the Northland Chorus, in local musical theater, and even while filling his patients’ cavities.

Like his father, Tom was an avid traveler, having explored 7 countries in addition to many states within the US. He appreciated the art, food, scenery, and people everywhere he went. No one was a stranger, no matter how far away he was from home – he easily struck up conversations with others from the grocery store check-out line to airport baggage claims, and was always genuinely interested in what people had to say. This approachable demeanor and his interest in other people made him an “extra dad” to his children’s friends, and later, to their spouses. He made everyone feel important and delighted in all of their successes. And within the Soo, there really were no strangers as it seemed like he had done work on almost everyone in the county; going to the store always involved stopping to chat with patients. Tom cared so deeply for all of his patients’ well-being, and it showed in the quality of his work and service. He frequently made the 40 minute trip to his office to take emergencies on his days off, and would call in prescriptions while on vacation (and immediately follow up with patient phone messages first thing after returning home from vacations.) Even after retirement, he kept his license and was planning to do dental work at the prison.

The last year and half was incredibly hard for Tom, with the sudden passing of Debbie, followed by the stresses of the COVID pandemic and subsequent retirement, and led to what could have been the hardest time of his life, but was made brighter and easier by the wonderful friends who gave so much of themselves. Despite the ongoing stresses, his final days were filled with travel, friendship, visits with his children, and pride and joy in his grandchildren. There was never a dull moment with Tom, and he was never bored.

Services will be held at the Sherman Park Pavilion on June 20, 2021. Exact time to be announced in the near future.

In lieu of flowers, donations to the American Red Cross or Doctors Without Borders.