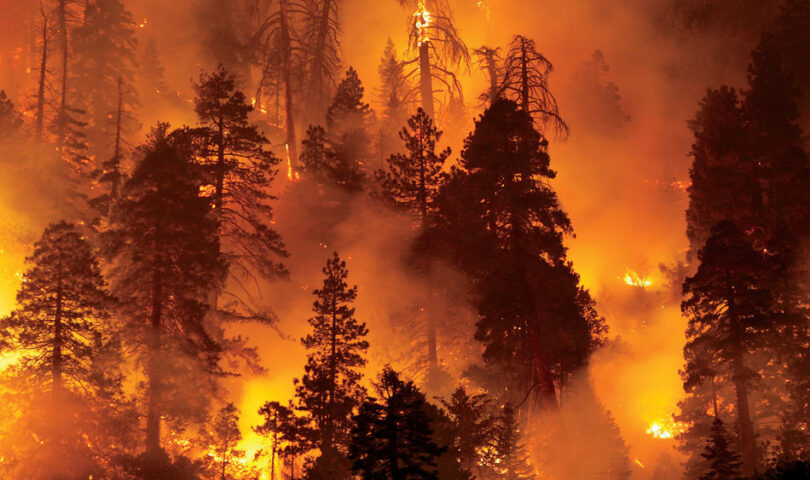 Droughts in parts of West Michigan put large swaths of land at an increased risk of wildfire.

Despite storms rolling through much of Michigan’s Lower Peninsula over the weekend, some parts of the state are abnormally dry for this time of year.

“There was actually a severe drought north of Kalamazoo, up to Grand Rapids, and then towards the Saginaw Bay area. . . We haven’t seen these conditions in quite a while,” said Paul Rogers, fire prevention specialist with the Michigan Department of Natural Resources (DNR).

The eastern Upper Peninsula and northern Lower Peninsula – areas that are expected to be moist around this time of year – are both areas of concern.

Much of the state received at least 0.5 to 1 inch of rain in the past few days. This left grasses, pine needles, dead leaves, and other “fine fuels” damp, temporarily mitigating fire risk.

“It significantly will help set back fires in those fuels. But again, they’re considered ‘one-hours,’ and given the right wind, and the right humidity, and the right temperature, within one hour, those fuels can dry out and start burning again,” Rogers said.

The Michigan DNR occasionally conducts prescribed fires to cut back on invasive species and help some plants release nutrients. The controlled burns also stimulate serotinous plants, or plants that require an external trigger to release their seed.

“Many, many Michigan plants, especially in Southern Michigan, are what we call fire-adapted ecosystems from hundreds of years ago,” Rogers said.

The coniferous jack pines that can be found up north, for example, need to experience a certain amount of heat to open and release seeds.

“It’s part of the natural process where a fire will come through, and even though it looks devastated, it actually has released all the seeds back into the natural seed bank.”

According to Rogers, the vast majority of Michigan’s forest fires are human-caused. Among those, the majority are a result of the burning of yard waste. Rogers urges Michiganders to abide by the following safety guidelines when starting debris burn or bonfires:

Rogers also offers guidelines for those who plan to launch holiday fireworks:

Those vacationing up north this summer should also check local policies regarding burning. Some municipalities in high-risk areas do not allow debris burns due to high population density. The Michigan DNR website offers information regarding burn permits, as well as daily burn safety level updates based on weather conditions.