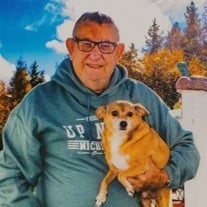 Charles David Orr, age 88, of Moran, Michigan, died Friday, June 11, 2021 with his family by his side. He was born January 22, 1933 in Petersburg, Pennsylvania to William and Florence (Schreffer) Orr.

Charles grew up in Oil City Pennsylvania and after attending high school he joined the U.S Air Force. He spent four years with the service in Korea before returning home and marrying Linda Soeltner. They were married sixty-three years and had six children and adopted three children. He worked for the U.S Forest Service for thirty-four years. He loved being in the outdoors spending time with his grandbabies, taking care of his lawn, and planting flowers.

Galer Dodson Funeral Home and Cremation in St. Ignace, Michigan is serving the family. Condolences may be sent to the family at www.rgalerfuneralhome.com.