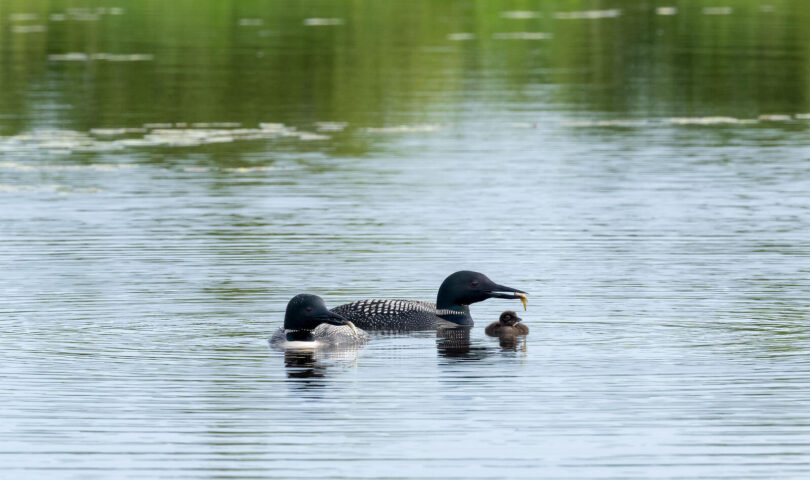 It’s 1987, and night has fallen at Seney National Wildlife Refuge in Michigan’s Upper Peninsula. A refuge biologist is out on the water armed with a spotlight and a net. He catches sight of his target—a Common Loon chick—and lets out a soft hoot. Attracted by the call, the dark, fuzzy chick swims toward what it believes to be its parents. When it gets close enough to the boat to realize it’s been deceived, the chick dives down . . . straight into the net hidden below the water.

Three Common Loon chicks caught that night were the first of many that would be banded at Seney, the site of the oldest long-term Common Loon banding program. Today, 34 years later, Seney’s banded loons continue to provide researchers with eye-opening information on this beloved species and the threats to its survival.

Two of Seney’s banded loons also just happen to be the oldest-known Common Loons in the world—and they’re a couple. One of those first three chicks banded in 1987—named ABJ—returned as an adult, and has come back every year since. Because we was banded that first year, researchers know that he is 34. Even more remarkably, his partner—a Seney Common Loon banded as an adult—is at least 35 years old. This year marks the duo’s silver anniversary.

Seney’s protected status, collection of small man-made pools, and ban on recreational water vehicles combine to make it ideal Common Loon habitat and a safe haven where loons can live long lives. But ABJ and Fe’s partnership and overall longevity has been far from normal or a sure thing, as they’ve survived competition from other loons and threats like avian botulism to breed at Seney year after year.

In the fall of 1987, ABJ and his two fellow banded chicks flew off on their 3,000-mile trip to the Atlantic Ocean (likely off the coast of Florida), where they would stay for three years to mature before returning inland to breed as adults. Thanks to long-term banding, biologists now know that male Common Loons are much more likely to return to the site where they were born, while females tend to find a different spot to mate and raise chicks. But at the time, biologists could only wait to see whether any of the original banded chicks would make their way back to the refuge.

America elected a new president, the Berlin Wall fell, and, finally, some of the chicks banded in that first year returned to Seney in 1990. That same year wildlife biologist Joe Kaplan came to the refuge and began banding loon parents as well (a more challenging feat than banding gullible, docile chicks), including one successful mother loon who would come to be known as Fe. Damon McCormick, co-director of the nonprofit Common Coast that has handled banding at Seney since 2005, named Fe after her long-term nesting territories known as F Pool and E Pool. The name is also a nod to the Spanish word for faith, referencing her unusually long partnership with ABJ.

Because Common Loons don’t start breeding until they’re four, the researchers knew Fe was at least one year older than the first returnees. To differentiate between the loons banded as adults and the returnees banded as chicks, biologists decided to call the returnees “adult banded juveniles,” or “ABJs.”

When a male loon returns inland to breed, it first needs to find a mate and carve out its own territory, which it will aggressively defend from other loons. But not all young loons get started right away. Beginning in 1990, one of the original ABJs diligently returned to his birthplace year after year, but he never claimed a territory or chose a mate. Researchers watched the male—who became known simply as “The ABJ”—with some bemusement.

“He didn’t seem to be able to get his act together,” Kaplan says. “We had all but given up on him.”

Then came the summer of 1997. At 10 years old, ABJ was finally ready to make his move. He set his sights on Fe, who had been successfully raising chicks with a mate named Dewlap since 1992. ABJ challenged Dewlap to a battle and was victorious, evicting his opponent and taking up residence in Fe’s territory.But Common Loons must defend their territories anew each year. So while couples might stay together for several seasons, they usually don’t couple up indefinitely.

ABJ and Fe, however, would go on to beat the odds. Even for loons, the two were aggressive at seizing territory. Each of Seney’s pools typically holds one to two breeding pairs of loons, but at the height of their empire, Fe and ABJ claimed five pools as part of their territory. “Although it’s not unusual to encounter a loon pair with territory spanning two adjacent lakes, I’ve never seen or heard of a pair that defended three (much less five) different water bodies,” McCormick says.

At the height of their empire, Fe and ABJ claimed five pools as part of their territory.

The pair also proved to be exceptional co-parents, hatching more chicks on average and boasting higher chick survivorship than other loons at the refuge. “Just like with people, there’s just a lot of variation in parenting strategies and competence,” McCormick says. ABJ is an especially dedicated father, rarely straying from his chicks’ side. In the fall, loon parents typically fly south a few weeks before their young. The mothers leave first, followed by the fathers, and then the chicks make their journeys alone. “The ABJ is almost invariably the last adult to leave the refuge,” McCormick says.

ABJ’s dedication is particularly important in a loon partnership because the father often watches the chicks while the mother hunts for food. Baby loons also like to hitch rides on their parents’ backs, and “males tend to be about 20 percent larger, so they can function as larger aircraft carriers,” McCormick explains.

But while life at Seney was going swimmingly for ABJ and Fe, danger was brewing beyond the refuge.

The first sign something was wrong came in 1999, when a banded Seney loon was found dead on Lake Huron. Seney loons stop over on the Great Lakes as they migrate to Florida for the winter, so researchers suspected that the bird might have died from botulism after eating a fish contaminated with the toxin. But it wasn’t until 2006 when Lake Michigan experienced a major botulism die-off —the first since the 1980s—that the threat to Seney’s loons was confirmed. The next year, Kaplan found a refuge loon that had died of botulism. The year after that, several loons failed to return to Seney.

Prior to these botulism outbreaks, 97 percent of banded loons that made it to adulthood came back to Seney in the spring each year. In the years after bad outbreaks, however, the return rate fell to 86 percent. The last bad outbreak was in 2012, but the loon population at Seney still hasn’t recovered. Since that year, the number of breeding pairs of loons in the refuge has fallen to 13 from a high of 22. McCormick and Kaplan suspect that botulism is the culprit behind much of the drop-off, but they’re currently studying other stressors like West Nile virus that might also play a role.

ABJ and Fe, who have successfully raised 32 chicks, lost one 12-year-old male chick to botulism in 2012. But each year, the pair have managed to avoid any outbreaks themselves and returned safely.

“It’s not surprising that the two oldest known loons are at Seney,” McCormick says, referring to the fact that the refugehas the oldest loon banding program. “But it is pretty remarkable that they’ve been paired to one another for a quarter century and have produced the most chicks.” ABJ and Fe have had several offspring return to Seney over the years; they first became confirmed grandparents in 2007 thanks to a returnee son born in 1999. And, following their pattern of bucking trends, the couple had two daughters return to the refuge last year.

The pair’s current chosen territory makes them easy to spot for anyone who wants to see them, says Jennifer Wycloff, a visitor services specialist at the refuge. Fe and ABJ’s pool is the first one on the refuge’s Marshland Wildlife Drive—a seven-mile one-way loop. The route goes right around the pool’s edge, giving folks a perfect view of the couple as they go about their day. An additional Fishing Loop provides even more views of the old couple’s favorite pool.

Kaplan hopes that the ability to get to know these and other loons as individuals can help make the species and its threatened survival feel less abstract. Loon numbers are declining as they battle botulism, habitat loss, and the creeping threat of climate change. “This is a hard-working pair of loons that renews its commitment to each other every year and then flies 3,000 miles to survive the winter,” he says. “If that’s not inspiring, I don’t know what is.”