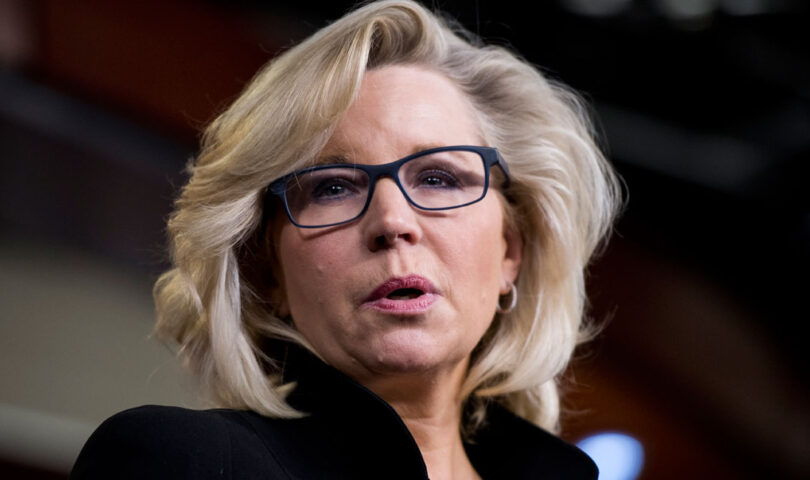 WASHINGTON (AP) — No. 3 House Republican Liz Cheney was clinging to her post as party leaders lined up behind an heir apparent, signaling that fallout over her clashes with former President Donald Trump was becoming too much for her to overcome.

Unbowed, Cheney on Wednesday implored her GOP colleagues to pry themselves from a Trump “cult of personality,” declaring that the party and even American democracy were at stake. “History is watching,” she said.

Trump issued a statement giving his “COMPLETE and TOTAL Endorsement” to Rep. Elise Stefanik of New York to replace Cheney. Stefanik, a 36-year-old Trump loyalist who’s played an increasingly visible role within the GOP, responded quickly, highlighting his backing to colleagues who will decide her political future.

“Thank you President Trump for your 100% support for House GOP Conference Chair. We are unified and focused on FIRING PELOSI & WINNING in 2022!” she tweeted.

The day’s events left the careers of Cheney and Stefanik seemingly racing in opposite directions, as if to contrast the fates awaiting Trump critics and backers in today’s GOP.

The turmoil also raised questions about whether the price for political survival in the party entails standing by a former president who keeps up his false narrative about a fraudulent 2020 election and whose supporters stormed the Capitol just four months ago in an attempt to disrupt the formal certification of Joe Biden’s victory.

Cheney showed no signs of backing off in an opinion essay posted Wednesday by The Washington Post.

She denounced the “dangerous and anti-democratic Trump cult of personality,” and warned her fellow Republicans against embracing or ignoring his statements “for fundraising and political purposes.”

She said House Minority Leader Kevin McCarthy, R-Calif., has “changed his story” after initially saying Trump “bears responsibility” for the Jan. 6 attack on the Capitol. McCarthy, who is tacitly backing the drive to oust her, has since said Trump issued a video to try halting the violence.

Cheney, in the Post, agreed with Democrats that a bipartisan investigation should focus solely on the riot and not on disturbances at some of last summer’s racial justice protests. In an apparent reference to her own situation, she said she would defend “basic principles” of democracy, “no matter what the short-term political consequences might be.”

Dozens of state and local officials and judges from both parties have found no evidence to support Trump’s assertions that he was cheated out of an election victory.

President Biden told reporters at the White House that the GOP is in the throes of a “significant sort of mini revolution.”

He added, “I think Republicans are further away from trying to figure out who they are and what they stand for than I thought they would be at this point.”

Cheney, a daughter of Dick Cheney, who was George W. Bush’s vice president and before that a Wyoming congressman, seemed to have almost unlimited potential until this year. Her career began listing after she was among just 10 House Republicans to back Trump’s impeachment for inciting supporters to attack the Capitol on Jan. 6, when five died.

Combined with a morning endorsement from No. 2 House Republican leader Steve Scalise of Louisiana and tacit backing from McCarthy, the momentum behind Stefanik’s ascension was beginning to seem unstoppable.

Stefanik, who represents a mammoth upstate New York district, began her House career in 2015 as a moderate Republican.

She spoke out against Trump’s ban on immigration from seven majority-Muslim countries, and joined Democrats in voting against Trump’s effort to unilaterally redirect money to building a wall along the Southwest border. She also led an effort to recruit female candidates for her party.

Stefanik’s rural district, which Barack Obama carried in his successful 2008 and 2012 presidential runs, was subsequently won twice by Trump. She morphed into a stalwart Trump defender and was given a high-profile role during the 2019 House Intelligence Committee impeachment hearings.

That was widely seen as a strategic move by the GOP to soften its image by giving a woman a prominent role. Stefanik’s status and visibility within the GOP have soared since then, and she’s also become a significant fundraiser for the party.

Cheney is the highest-ranking woman in the GOP leadership. Replacing her with Stefanik — and not a man — is seen as politically wise as the party tries to bolster its weak appeal among female voters.

There are just 31 Republican women in the House, about one-third of Democrats’ total but up from the 13 who served in the last Congress.

There were no other visible contenders for Cheney’s post, with a secret ballot by House Republicans on her fate possible next week. A vote on a replacement, seemingly Stefanik, could come that day as well.

Cheney was making little noticeable effort to cement support by calling colleagues or enlisting others to lobby on her behalf, said two House GOP aides who spoke on condition of anonymity to describe the situation. A third person familiar with Cheney’s effort also said she was not lining up votes.

Cheney’s opposition to Trump put her out of step with most House Republicans, 138 of whom voted against certifying the Electoral College vote for Biden’s victory.

He called Cheney “a warmongering fool who has no business in Republican Party Leadership.” He praised Stefanik for supporting his America First agenda and added that she “has my COMPLETE and TOTAL Endorsement for GOP Conference Chair. Elise is a tough and smart communicator!”

Stefanik is committed to focusing on Republican efforts to gain House control in the 2022 elections “and fighting against Speaker Pelosi and President Biden’s radical socialist agenda,” said the statement from Fine.

McCarthy said Tuesday that rank-and-file Republicans were concerned about Cheney’s “ability to carry out her job” because of her public comments about Trump.

Republicans say a McCarthy speech backing Cheney at a closed-door House GOP meeting in February was largely credited with her surviving an earlier push by conservatives oust her, in a 145-61 secret ballot.

A top House GOP aide has said McCarthy won’t do that this time.

Senate Minority Leader Mitch McConnell, R-Ky., kept his distance Wednesday from the House GOP struggle. Asked if he would help Cheney, he told reporters in Georgetown, Kentucky, “100% of my focus in on stopping this new administration.”