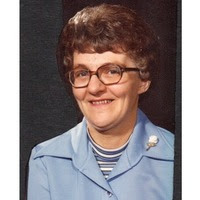 Joan Louise (Knetzger) Tilson, age 94, died on Friday, April 23, 2021 in Saline, Michigan where she moved in 2007 after living in Sault Ste. Marie for over 50 years.  Joan was born on February 7, 1927 in Milwaukee, Wisconsin to Irene and Alois Knetzger.  After her father died when she was 3, her mother, Irene, married Charles Strauch and they raised a family of 10 children on a farm near Germantown, Wisconsin.

Joan graduated from The University of Wisconsin (UWM) in 1948 where she studied education.  Upon graduation, she accepted a teaching position with Rudyard Area Schools and arrived by train to begin her teaching career in Rudyard.  On September 22, 1951 she married John “Jack” Tilson and moved to Sault Ste. Marie where Jack opened a barber business.  Joan became a lifelong member of St. Joseph’s Catholic Church and was active in the Women’s Guild. John and Joan were blessed with 4 children (Tim, Lynn, Karen and Margaret).  Joan later returned to teaching and taught 7th-grade math to three generations of Chippewa County students in Sault Area schools for over 30 years.  She retired from teaching in 1986 and volunteered with several organizations:  St. Joseph’s Catholic Church, St. Joseph’s Guild Thrift Shop, Bayliss Public Library, and Chippewa County Hospice.

To join the Mass remotely, please use this link:

Donations can be made to the John H. Tilson Memorial Scholarship Endowment fund by sending a check payable to the Rudyard Area Community Foundation, P.O. Box 394, Rudyard, MI 49780; please indicate TILSON in the memo portion of your check. The scholarship was established by Joan after Jack died in 2004 and is awarded to a Rudyard high school senior who will be attending college to become a teacher.