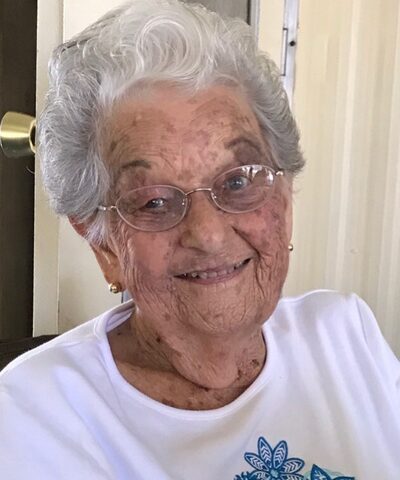 Gladys Marie (Ball) Malette passed away peacefully at her home on Thursday, May 20, 2021. She was 99.  Gladys was born in Ozark, Michigan to Lula Ellen (Shipley) Ball and Ephriam Allie Ball on March 5, 1922.  Gladys was preceded in death by her husband of 64 years, Arthur Rogers Malette who owned Malette’s Standard Service on the corner of Easterday and Ashmun for many years.  In their later years they owned Chippewa Travel Park and managed it together in the summer, happily traveling south during many winters.

Gladys worked with and supported the American Field Service and in 1966 welcomed Christer Palm, an exchange student from Sweden, into her home for a year.  That became a lifelong and very important friendship.

Gladys has always been active in her church, the First Baptist Church of the Sault serving in many capacities including teaching children on Wednesday afternoons and also teaching Sunday School.  She was also known as a great Cub Scout leader.  For many years she donated her time serving coffee with the Women’s Hospital Auxiliary of War Memorial Hospital and she was on the Chippewa County Fair Board. Gladys was always happiest staying busy with her hands making quilts for grandchildren and great grandchildren, embroidering pillowcases for gifts, and keeping beautiful flower and vegetable gardens.

She happily spent many winters at the Palms Estates in Lorida, Florida, making numerous friends there.Services will be on Monday, June 14. There will be a gathering at 10:30 and celebration of life at 11:00 a.m. in the Chapel at Oaklawn Chapel Gardens.