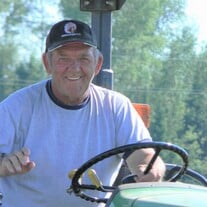 Eugene spent his early childhood in DeTour. At age 4, his family moved to Rudyard. During his years at Rudyard High School, he played basketball and later, often bragged about his awesome “left hook!” He met the love of his life, Paulette, “Polly,” when she was in grade school. They married June 10, 1961 at the Rudyard Presbyterian Church. Shortly after, he bought his parents’ farm. He was well known for quality hay sold through E & K Ross Hay Company. His hay fed the horses of Queen Elizabeth, the camels for the Saudi Arabian Camel Races, and the Budweiser horses. He also managed Goodhart farms for a few years. He retired in his late 70’s.

Eugene was known for his sense of humor and many shenanigans. He truly loved the farm life and was not fond of leaving the EUP. When he wasn’t out in the fields, you could find him golfing or kicked back in his recliner watching TV.

In lieu of flowers, donations may be sent to Hospice or First United Presbyterian Church, PO Box 157, Rudyard, MI 49780.