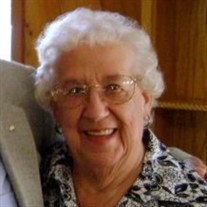 Ethel grew up in Sault Ste. Marie, Michigan, and graduated from Soo Area High School in 1946. She worked during her school years at A&P Grocery and began working as their bookkeeper after high school graduation. In 1949, she married Anthony “Tony” Louis Autore. Tony was a fuel oil delivery man for Standard Oil Company in the Sault Ste Marie area. In 1954 Standard Oil posted a new route in Cedarville and Hessel. Tony and Ethel moved with their young family to the “wilderness” in the spring of 1955. Tony delivered the fuel and Ethel was the bookkeeper/general manager for their home delivery business. In 1976 they bought out the Standard Oil operation and equipment in Cedarville and Hessel and established Autore Oil Company Inc. They continued to build and operate Autore Oil Company until their retirement in 1989.

Ethel was an active member of Our Lady of the Snows Catholic Church in Hessel, and the Alter Society. She was also a member of the Les Cheneaux Snowmobile Club.

Ethel enjoyed knitting for her family and friends—from sweaters, and hats to socks and mittens, she loved providing and giving to others around her.

Burial will be in Edgewood Cedar Cemetery in Cedarville.

Anyone planning to attend, the family would like everyone to please take all Covid-19 precautions. Family will be spaced out to ensure social distancing and masks are to be worn. Thank you.