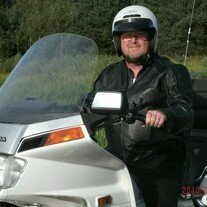 Charles was a man that gave his all. Every moment he had he spent helping others and showing all his tricks of the trade. There was not a thing that man couldn’t fix or rig up to work. At home we often called him MacGyver. His favorite times were holding his grandchildren and great grandchildren in his lap as long as they wanted.

More than anything Charles loved his wife. Married for 45 years Karen was his life and he would have conquered the world for her. Charles had a love for riding his Goldwing. Up until his last days he begged to take it out. He loved talking about his rides to Sturgis and how amazing it felt to ride for hours. Charles was an amazing husband, father, grandpa, uncle, and friend. He will be dearly missed.

Charles is predeceased by his parents, Everett and Margaret Wright and brother, Carl Wright.