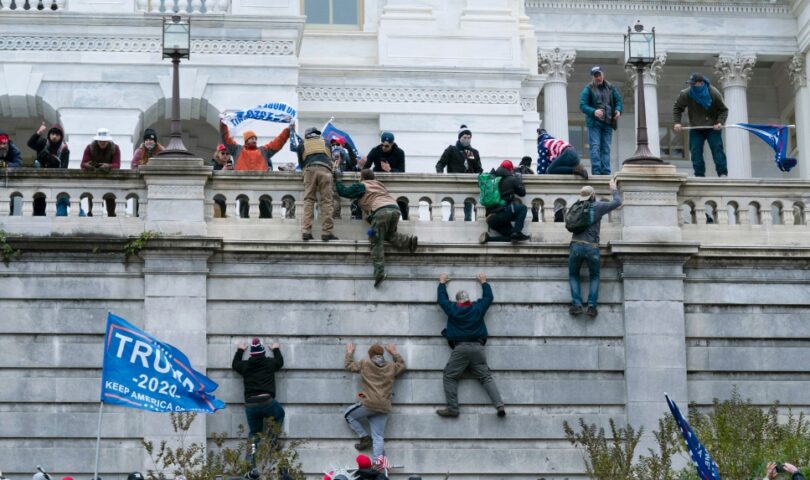 PHOENIX (AP) — Joshua Matthew Black said in a YouTube video that he was protecting the officer at the U.S. Capitol who had been pepper sprayed and fallen to the ground as the crowd rushed the building entrance on Jan. 6.

“Let him out, he’s done,” Black claimed to have told rioters.

But federal prosecutors say surveillance footage doesn’t back up Black’s account. They said he acknowledged that he wanted to get the officer out of the way — because the cop was blocking his path inside.

At least a dozen of the 400 people charged so far in the Jan. 6 insurrection have made dubious claims about their encounters with officers at the Capitol. The most frequent argument is that they can’t be guilty of anything, because police stood by and welcomed them inside, even though the mob pushed past police barriers, sprayed chemical irritants and smashed windows as chaos enveloped the government complex.

The January melee to stop the certification of Joe Biden’s victory was instigated by a mob of supporters of then-President Donald Trump who have professed their love of law enforcement and derided the mass police overhaul protests that shook the nation last year following the police killing of George Floyd in Minneapolis.

But they quickly turned on police in one violent encounter after another.

“We backed you guys in the summer,” one protester screamed at three officers cornered against a door by dozens of men screaming for them to get out of their way. “When the whole country hated you, we had your back!”

The Capitol Police didn’t plan for a riot. They were badly outnumbered and it took hours for reinforcements to arrive — a massive failure that is now under investigation. Throughout the insurrection, police officers were injured, mocked, ridiculed and threatened. One Capitol Police officer, Brian Sicknick, died after the riot.

Officers who spoke to The Associated Press said police had to decide on their own how to fight them off. There was no direction or plan and they were told not to fire on the crowd, they said. One cop ran from one side of the building to another, fighting hand-to-hand against rioters. Another decided to respond to any calls of officers in distress and spent three hours helping cops who had been immobilized by bear spray or other chemicals.

Three officers were able to handcuff one rioter. But a crowd swarmed the group and took the arrested man away with the handcuffs still on.

Still, some rioters claim police just gave up and told them that the building was now theirs. And a few — including one accused of trying to pull off an officer’s gas mask in a bid to expose the officer to bear spray — have claimed to be protecting police.

Matthew Martin, an employee for a defense contractor from Santa Fe, New Mexico, who has acknowledged being inside the building, claimed police were opening doors for people as they walked into the Capitol.

Dan Cron, Martin’s attorney, said a photo filed in court by authorities shows an officer using his back to hold a door open for people. No police barriers were in place when Martin walked into the Capitol area, nor was there anyone telling people they weren’t allowed in the building, Cron said.

“He thought that was OK,” Cron said, adding that his client was inside the Capitol for less than 10 minutes and didn’t commit any violence. “He doesn’t know what the policies and procedures at the Capitol are,” Cron said. “He had never been there.”

On the surface, images taken of officers who appear to step aside as the mob stormed the building could be beneficial to the rioters’ claims. In the days after Jan. 6, those images fueled rumors that police had stood by on purpose, but they have not been substantiated.

“The context will be very important in claiming officers welcomed in a crowd,” said Loyola Law School professor Laurie Levenson. “They were trying to control a fast-developing, difficult, potentially explosive situation. So I don’t think it’s enough to say, ‘The officer didn’t tackle me.’”

Authorities say Michael Quick of Springfield, Missouri, claimed that he didn’t know at the time that he wasn’t allowed in the Capitol when he and his brother climbed in through an open window. He believed police were letting people in, despite seeing officers in riot gear.

Attorney Dee Wampler, who represents Michael and Stephen Quick, said he doesn’t currently have proof for the claim the officers were letting people into the building, but he pointed out that he has thousands of documents from prosecutors still left to review.

“If this case was tried, the evidence would be that there was a fairly large number of officers that were standing around when my clients entered, and they didn’t try to stop the Quicks,” Wampler said, adding that his clients didn’t commit any violence inside the Capitol.

But the argument did not work for Jacob Chansley, the Arizona man who sported face paint, a furry hat with horns and carried a spear during the riot.

Chansley’s lawyer said an officer told his client that “the building is yours” and that he was among the third wave of rioters entering the Capitol.

In rejecting a request two months ago to free Chansley from jail, Judge Royce Lamberth said it wasn’t clear who made the comment and concluded Chansley was unable to prove that officers waved him into the building, citing a video that the judge said proves that the Phoenix man was among the first wave of rioters in the building. The judge noted that rioters were crawling in through broken windows when Chansley entered the Capitol through a door.

Chansley’s attorney, Albert Watkins, still insists that his client was in the third wave of rioters in the building and said it shouldn’t shock the public that rioters who were hanging on to Trump’s every word and believed the election was stolen legitimately believed they were allowed in the building. “It’s what’s in their hearts and minds,” Watkins said.

In all, Joshua Black made two claims that he helped officers at the Capitol.

Before encountering the officer he claimed to have protected at a Capitol doorway, Black said, police shot him in the cheek with a plastic projectile as he tried to keep another officer from being “bootstomped” by other rioters while outside the Capitol. But prosecutors say surveillance video doesn’t depict an officer on the ground, nor is Black shown trying to help an officer.