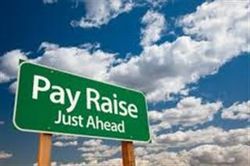 All elected state officers would receive 2 percent raises in 2023 and 2024 under a recommendation issued Friday by the State Officers Compensation Commission, putting the proposal before a Legislature that has in recent years largely declined to approve such increases.

The proposed increases require action by the Legislature, which has final authority in approval of salary increases to elected state officers.

Commission members meet every two years to make recommendations for increases or decreases in salaries of lawmakers, the governor, lieutenant governor, Supreme Court justices, attorney general and the secretary of state.

A concurrent resolution passed the Legislature in December 2020 to raise the salaries of the justices by 5 percent each year in 2021 and 2022. However, since the resolution did not pass until during the lame duck session in 2020 following the most recent elections, those increases due to constitutional requirements will not be implemented until 2023, and would increase their pay by 10.25 percent, pending any legislative action to change course.

If the Legislature were to approve Friday’s recommendation, each elected state officer would receive a 2 percent salary increase, including the justices in addition to the one already approved.

Outside of the increase to the salaries of the justices, the Legislature has otherwise not acted on a recommended pay increase since 2002. All state officers other than Supreme Court justices took a 10 percent salary cut in 2011. The Legislature has since then declined to restore those salary cuts.

The recommendation for the 2 percent salary increase was approved by a 5-1 vote.

Commissioner Robert Emerson said many of the elected officers have not seen a salary increase in more than a decade.

“I think it’s long past time that we provided some sort of increase,” Mr. Emerson said.

Commissioner Paula Zelenko agreed with Mr. Emerson but questioned what the “political reality” would be that the Legislature would approve such a move.

Mr. Emerson said he did not believe it was his job to figure out specifically if the Legislature was up to approving the recommended changes.

Abby Walls, spokesperson for Senate Majority Leader Mike Shirkey, said the majority leader will review the recommendations, but the first impression was that “no one in the legislative or executive (branch) should be getting pay raises until the people of Michigan are able to fully go back to work.”