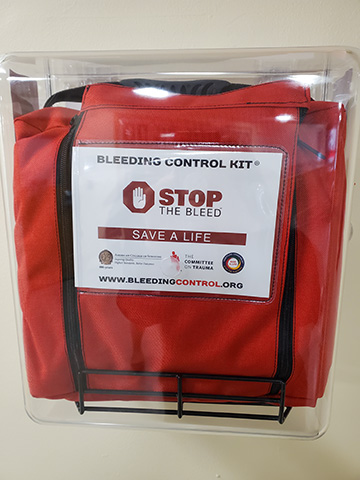 Sault Ste. Marie, MI – The War Memorial has installed bleeding control kits throughout the hospital and at offsite clinic locations. Each kit contains resources to stop or control bleeding such as tourniquets, trauma bandages, gauze, shears, an emergency blanket, and personal protective equipment.

Stop the Bleed is a nationwide initiative that was launched in 2015. The goal of Stop the Bleed is to encourage bystanders to provide immediate assistance to help stop bleeding in injured persons before trained responders arrive.  Bleeding control kits are intended to provide the essential life-saving equipment necessary in a major trauma event. Each kit is mounted to the wall and contains a laminated sheet inside with simple instructions for civilians to use in unfortunate but realistic scenarios.

“In a trauma incident, controlling bleeding is one of the most important actions to take” says Austin Conway, Director Emergency Preparedness at War Memorial. “Someone who is severely bleeding can bleed to death in as little as 5 minutes. We have installed 11 bleeding control kits throughout War Memorial’s main campus and off-site clinic locations. These kits will assist in saving lives should an unfortunate event arise” Conway added.

The Stop the Bleed program was initiated by a federal interagency workgroup convened by the National Security Council Staff, The White House.  For more information on Stop the Bleed, visit www.stopthebleed.org