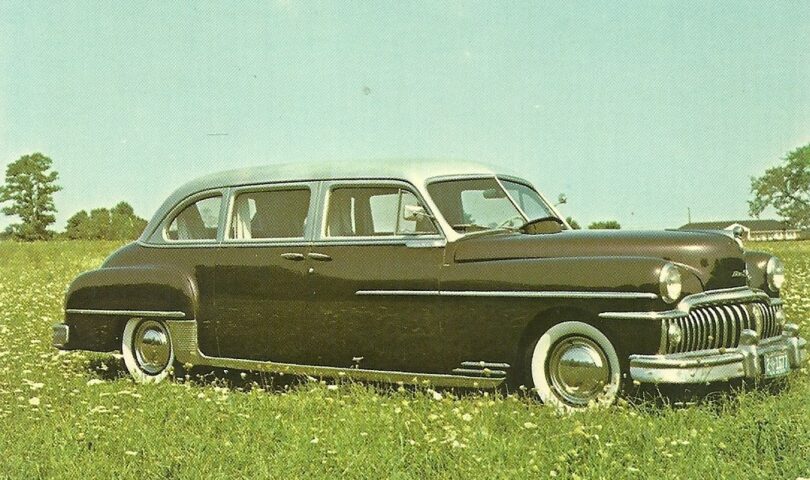 My grandfather owned a beautiful green DeSoto. I remember him driving it to our house when I was a little girl. This was back in the early 1960s. If I was out playing with the neighborhood kids, he would drive around until he found me, then take me home so we could visit. He always had a pack of Dentyne gum for me or a bag of those soft orange peanut-shaped candies. I can still see him vividly in my mind driving that car.

He died in early 1965, and the DeSoto stayed in his garage for a little while until my grandmother gave it to my dad to use. She had never learned to drive. The day my dad parked it in front of our house, I wasn’t exactly thrilled. That car was huge. When everyone else in our neighborhood was driving a station wagon, there was my dad driving that big green DeSoto. It was in great condition, it was just different from what others were driving. I didn’t have a clue at that age of what a classic it was or would become.

I smile now when I think of that car. I have so many happy memories in it, such as Sunday afternoon drives after church. We’d pick up Grandma, and off we would go for an afternoon drive and picnic.

Sometimes we would head south to St. Ignace or the Cedarville – Hessel area. I can remember on those drives stopping at a mom-and-pop market,  having lunch meat sliced at the meat counter. My dad would then buy a loaf of bread and a bottle of pop for each of us out of the old-style pop machine. I’d usually get an Orange Crush. It would be so cold going down my throat, the bottle perspiring. We’d find someplace to park near the water and watch the boats while listening to the sound of the waves lapping the shore.

If we were down near Cedarville, we usually pulled over at Bush Bay and picnicked there. My sister and I would play on the big rocks. Then we would walk in the woods, my mom pointing out the beautiful Lady Slippers that grew there. I had never seen flowers so beautiful, as those orchids growing in the wild. I wanted Cinderella to see them. Sometimes if Grandma wasn’t with us, my dad would fish for a bit. I have his fishing poles from back then, along with his lures and wicker fishing creel. Reminders of beautiful memories, spent with my family, in the green DeSoto.

Other times on those Sunday drives, we would head west past Brimley and picnic on the shores of Lake Superior. Lake Superior was and still is my favorite lake. It shows its emotions in the size of its waves. There was something in the power of those waves that mesmerized me. Their strength and beauty, awe-inspiring. Often we would pull into Iroquois Point and walk the sandy beach. Other times, we would drive towards Paradise and pull into one of the roadside picnic places. It was such fun walking in the woods or along the beach. I never wanted to leave.

During blueberry season, we would head into the woods and pick berries. I had a little plastic sand pail that I used. I didn’t pick as many as the others, because I was too busy focusing on what was around me, and the noises I heard. I loved it whenever I saw a chipmunk because I always thought it was Alvin from the Chipmunks. My mom had to keep reminding me not to go near the poison ivy, so I was always watching out for that instead of picking berries.

I remember one time, coming back from Dollar Settlement, the sun was shining brightly into the old Desoto. That was before air conditioning in cars. Grandma would take off her sweater and roll down the window a bit, and then shut her sweater sleeves in it to block the sun. I thought my grandmother was so smart. I’m not sure my dad was too happy though, about driving down the road with two sweater sleeves flapping out the window. He never said a thing though. We also unlatched those tiny windows that were in the front and back. They let in just enough of a breeze to cool things down without messing up my mom’s hair.

If I could go back in time and relive only the good parts of my life, those Sunday afternoon drives would be at the top of my list. Climbing into that spacious DeSoto with Grandma singing songs and hymns while taking in the beautiful scenery of the Upper Peninsula, and having family around me to ground me, and keep me safe, meant everything to me.

Things seemed so much simpler then. It’s a different world that we live in now. Maybe that’s why God gave us memories so that we could remember all the special times amid problems and unrest. My memories remind me of a gentler time when church and Sunday picnics were taken for granted. Where morals were taught and followed, and where values were created and deemed important. And you always knew where your children were and what they were doing.

Good memories bring a smile to my face and ease all the anxiety that I see around me. That’s what my memories of the green DeSoto do for me. Oh, and about that DeSoto, my dad ended up giving it back to grandma so she could sell it. Guess what kind of car my dad bought? A station wagon. A funny thing about that station wagon, it never seemed the right fit for our Sunday drives. I barely remember it, but I sure remember that beautiful green DeSoto.