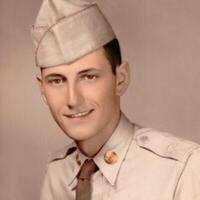 Terry was born on January 9, 1932, in Newberry, Michigan to the late John and Irene (Kennedy) Cottelit.  He was a graduate of Superior – Bay Mills Township Schools with the class of 1950.  Terry served his country in the United States Army and was stationed in Germany during the Korean War. He was a member of the American Legion and the VFW.  Terry enjoyed his grandchildren and great-grandchild.  He loved being outdoors, feeding the birds, watching wildlife, and hunting. Terry had a great love for baseball, the Detroit Tigers were his favorite.

Terry was preceded in death by his parents and a brother: James Cottelit.A private family funeral service will be held on Saturday, April 3, 2021, at C.S. Mulder Funeral Home with Deacon Bill Piche officiating.  A viewing will be from 10:00 AM until 12:00 noon on Saturday.   Burial will be at Oaklawn Chapel Gardens.

In lieu of flowers, memorials may be left to Hospice of the EUP or the Chippewa County Animal Shelter.