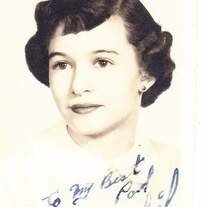 Shirley Ann Campbell, age 86, of St. Ignace, Michigan, passed away on March 20, 2021 at McLaren Northern Michigan in Petoskey, Michigan. She was born on November 23, 1934 in St. Ignace to Elmer and Madeline (Wisner) Johnston.

Shirley grew up in Carp River, Michigan and attended school in St. Ignace, where she met and married James “Jim” Campbell in 1953. She lived in St. Ignace and Carp River most of her life. She and Jim moved the family to Freeland and Ishpeming, and fewer of them back to St Ignace and Traverse City. Jim was employed with Michigan Bell and AT&T before moving back to Carp River.

Shirley was a member of the Zion Lutheran Church in St. Ignace and the Jaycettes in her younger days. Shirley and Jim enjoyed traveling when the children were grown. She enjoyed a long life but never stopped missing her dear husband Jimmy. Who passed away in June 2014.

Shirley was preceded in death by her husband, Jim; daughter, Candy Campbell; her parents; and four siblings.

A memorial service will be held at a future date and place to be determined.