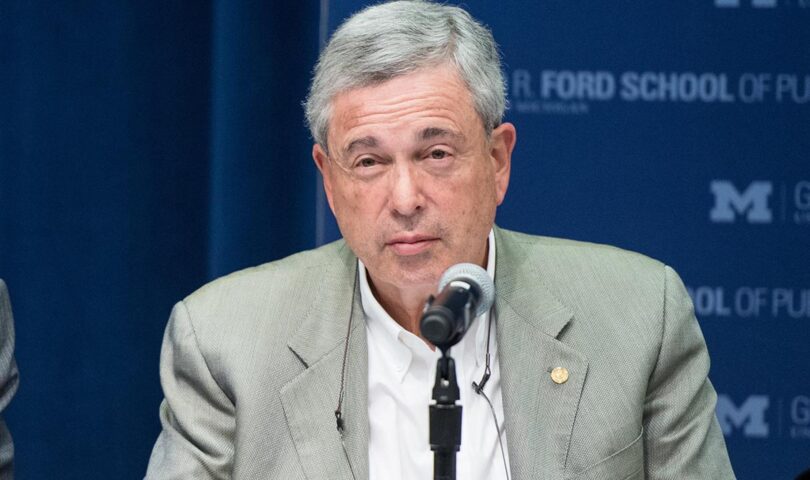 Michigan Republican Party Chair Ron Weiser said Friday he will not resign from his position on the University of Michigan’s Board of Regents after the body voted on a resolution calling on him to do so following his comments calling the top three officials in the state “witches,” and a joking reference to assassination of two U.S. House members.

All five of the present Democratic regents voted for the resolution calling on Mr. Weiser to resign from the board as well as stripping him of his positions on the U-M Flint and Dearborn committees and the finance committee. The board’s only other Republican, Regent Sarah Hubbard, abstained.

In a statement, the university acknowledged this was the first time in U-M’s more than 200-year history that the body has voted to censure a member of its own Board of Regents.

“I take full responsibility for what I said and I’m sorry and regret my poorly chosen words that were offhand remarks made at a private Republican Party meeting,” Mr. Weiser said during he meeting. “I agree with part of this resolution, but I will not resign. I pledge to be part of a respectful dialogue going forward and challenge my colleagues and others to do the same. I will not be cancelled.”

The U-M Board of Regents met Friday, a week after Mr. Weiser made comments calling Governor Gretchen Whitmer, Attorney General Dana Nessel and Secretary of State Jocelyn Benson “witches” and that they were “ready for the burning at the stake.”

Further, in comments that he’s since clarified were an attempt at a joke, Mr. Weiser also said before a group of Republican activists that the only other way U.S. Rep. Fred Upton and U.S. Rep. Peter Meijer could be removed from office besides voting them out would be through assassination.

Mr. Weiser, a few days after the comments and only after first attempting to distance himself from the issue, did issue a blanket apology on the matter which was panned by both Ms. Nessel and Ms. Benson.

In a resolution introduced by Regent Board Chair Denise Ilitch, the regents condemned Mr. Weiser’s remarks but acknowledged it did not have the power to outright remove him from the board unless he chose to resign.

There is a caveat in state law that would provide for the impeachment of a sitting university board member, though this would first require a majority vote in the House of Representatives on the issue, which is highly unlikely.

Ms. Whitmer could intervene, theoretically under state law, though only if the Legislature were not in session to determine whether a board member was exhibiting a gross neglect or duty, corrupt conduct in office or “any other misfeasance therein,” but would be required to report that charge to the Legislature as soon as resumed for session.

Mr. Weiser was elected to an eight-year term on the board in 2016.

“Regent Ron Weiser’s language referencing our constitutional officers as witches to be burned at the stake, brought national and international disrepute on the University of Michigan and his reference to the word assassination regarding members of Congress is damaging to the university … such language endangers the lives of our constitutional officers and members of Congress,” the resolution said.

Prior to the reading of the resolution, Ms. Ilitch acknowledged the board had received a slew of calls, voicemails and other messages from members of the general public and university faculty alike demanding for Mr. Weiser to see some sort of punishment for his remarks. Joining those calls were even lawmakers representing districts where the school resides, which last week sent a letter to the university.

A 1966 graduate of the university, Mr. Weiser and his family are one of the top donors to the institution, contributing an estimated $100 million in donations as of June 2020. His name is featured on an interdisciplinary academic building, Weiser Hall. Other buildings including his name are the Weiser Center for Europe and Eurasia as well as the Weiser Center for Emerging Democracies.

Questions as to whether those namesakes will be revoked due to his comments still remain unanswered. A response from Ms. Ilitch following the meeting indicated that the board did not have any further resolutions before it regarding the possibility of name removal from campus buildings, or any other forms of penalty.

Following the introduction of the resolution, a slew of board members condemned Mr. Weiser for his conduct and alleged that this type of rhetoric was the kind of verbiage which led to men plotting to kidnap and kill Ms. Whitmer late last year.

Upon comments from the board members urging his resignation, Mr. Weiser appeared to have left the Zoom meeting.

However, to the idea that Mr. Weiser was somehow being canceled, several regents took issue with his framing of events.

“None of us deserves to be damned only for their worst moments, for one lapse in judgment. But when given the chance to say sorry, Regent Weiser refused for two days before offering a vague, limp apology. … He’s claimed that outrage of his remarks, as he did today, is some sort of insidious attempt to cancel him,” Regent Jordan Acker said. “Accountability is not cancellation.”

Regent Mark Bernstein took that message a step further, saying that by not condemning Mr. Weiser’s language – which he deemed violent and misogynistic – the university would appear to be giving a free pass to such rhetoric, which could in turn encourage it.

“It would be easy to dismiss Regent Weiser’s remarks as just partisan politics as usual, or a mere slip of the tongue. But this conduct cannot become politics as usual. It wasn’t a slip of the tongue – it is a strategy,” Mr. Bernstein said. “Threatening rhetoric has no place in even the most partisan circumstances. And while Regent Weiser’s conduct occurred in the political arena, the harm it causes goes far beyond politics.”

He harkened to the foiled plot to kidnap and kill Ms. Whitmer as the result of when rhetoric is absorbed by individuals no longer on the fringes of society, and instead hearing these kinds of remarks as a green light to commit potentially heinous actions.

“We cannot permit this type of speech to become normalized by our silence,” Mr. Bernstein said.

While not defending the language, Ms. Hubbard told board members during her remarks that she expected professionalism and respect be afforded to him and herself when being contacted about Mr. Weiser’s position as regent.

“I look forward to getting back to addressing the important issues facing the university, such as the need to constantly strive for academic excellence and focusing on student needs,” she said.