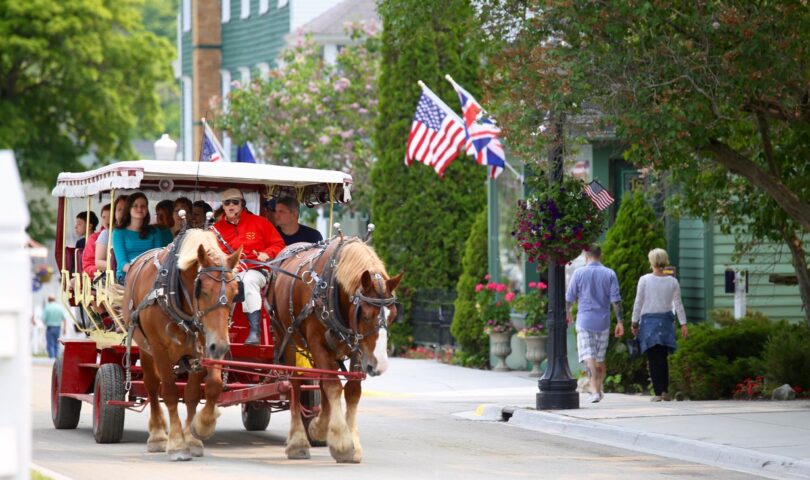 MACKINAC ISLAND, MI – There’s definitely a pre-season buzz swirling around Mackinac Island this month. Construction projects are finishing up downtown, more supplies are being delivered by boat each day, and the list of businesses deciding when they’ll swing open their doors is growing.

Mackinac Island Tourism Bureau has published its 2021 list of scheduled opening dates for big resorts like Grand Hotel, Mission Point and the Inn at Stonecliffe, as well as Main Street’s well-known hotels and the island’s collection of smaller spots and B&Bs. Downtown businesses and activities are also on the list. The list is being updated as the island’s April 30 season opening gets closer, so check back with the tourism bureau’s website if you’re not seeing your favorites on the list yet.

Recent weekends already have been seeing tourists arrive on the winter ferry for some low-key adventures. Right now, only one island restaurant is open.

But all that is about to change in just a few weeks.

“Without a doubt, excitement is building on Mackinac Island,” said Tim Hygh, executive director of the tourism bureau. “Hotels, restaurants, shops and attractions are making their final preparations, and we’re thrilled to say phones have been ringing off the hook with guests looking to plan their stay.

“There is significant pent-up demand for travel – particularly to destinations like Mackinac Island that offer wide open spaces to enjoy safely – and we’re looking forward to welcoming our guests back for a great season in just a few short weeks.”

Linda Sorensen, an administrative assistant for the Mackinac Island Police Department, recently arrived from the mainland to get settled into her third island season on the job. In her off-hours, she’s been checking out the off-season work that’s wrapping up on buildings and outside some of the resorts. “They are kind of in a crunch time now. It’s an exciting time,” said Sorensen.

Islanders are ready for a busy season – and it may be a bit more of a surge than even some expect, based on early indicators. If you’re headed to Mackinac this season, one good way to prepare is to check the Addicted to Mackinac Island Facebook group. Sorensen is one of the co-administrators, and it’s a fun online spot for island lovers to share information, check out what’s going on and connect with each other over their enthusiasm for all things Mackinac.

Here is the list of the island’s scheduled opening dates by category:

(** Pontiac Lodge and Village Inn Suites are open all year)

(**Mustang Lounge is open all year)