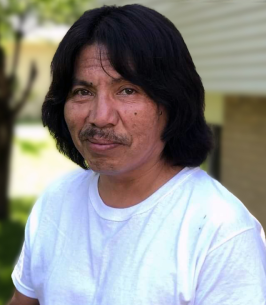 The family will greet friends at a public visitation for James on Saturday, April 10, 2021 from 5 p.m. until 8 p.m. at Clark Family Funeral Chapel. Private Funeral Services will take place. Per James wishes, cremation will follow at Daisy Hill Crematory in Mt. Pleasant. Interment of his ashes will take place in Woodland Cemetery. Memorial contributions may be made to his family. Envelopes will be available at Clark Family Funeral Chapel.

James was born December 7, 1966, in Mt. Pleasant, the son of James T. and Gwendolyn (Kahgegab) Osawabine. James was a member of Saginaw Chippewa Indian Tribe. He loved playing his electric guitar, going to concerts, and listening to music. James loved his family and time spent with them. Camping and road trips were also some of his favorite things to do.