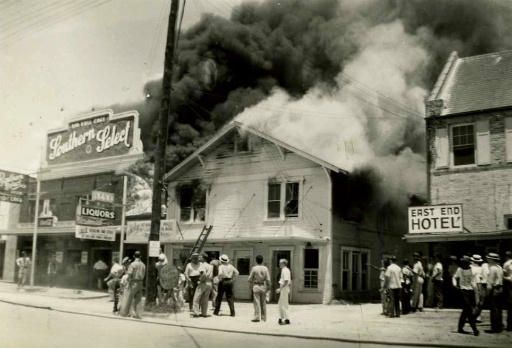 James R. Ryan and Joseph O’Jibway owned the two fastest horses in the Sault and probably in the Upper Peninsula. Black Hawk and Mon Hawk were noble steeds. Kentucky bred on Sugar Island. Black Hawk was a beautiful jet black and Mon Hawk a slick bay. The main feature of the winter sports was the race between these horses. They were pulled off Sundays and holidays. They raced from the Catholic Church to Ashmun Street. These races drew some crowds. It was nip and tuck as to which one was the fastest. (F.W. Roach, 232 Ferris Street)

I was playing on Water Street when the last fire broke out. I heard the yell “fire” while I was in front of J.P. Haller’s store, and as I looked, two big arms of flames came out by John Nevin’s Saloon. In less time than it takes to write these lines, three frame buildings were in flames. Everyone said it would stop at Prenzlauer Brothers brick store, but that building like the others, wilted when the flames struck them. (Herbert C. Ryan, 916 Court Street)

I remember the first blacksmith shop in the Sault. It was located about where Bruhn Hardware is and operated by Mr. Stonehouse. Jim Lipsett was working for Mr. Stonehouse at that time but later started in the implement business, at the corner of Ridge and Ashmun Streets where Bacon’s Drug Store is located. The first hardware store was opened by Mr. Scranton at the corner of Plant Alley and Water Street. The first sewing machine agent was Mr. O’Conner. George Laundy was the first tombstone man here and is still in that business. The first bank was operated by Fowle and Mead, on the corner of Ashmun and Water Streets. Mr. Ruehle had a shoe shop where the Soo Hardware warehouse is located. He made shoes that sold for $11 and $12 per pair. The first doctor was Dr. Lyons, his office was near the Chippewa House and Water Street. The first bakeshop was called the Star Bakery. The first lawyer was Mr. Brown. Mr. Johnson was the First Methodist Minister. Mrs. Lambert had the first millinery store. Byron Campbell was the first piano salesman here. (James Shannon, 425 Cedar Street)

Mother sent me to pay our milk bill which was $1.05 for 21 quarts. I said to Mrs. Newcomb that this was a lot of money. She said, “you got good measure and all the cream with it.” I said to Mrs. Newcomb, “you haven’t had your washing done yet?” She said look at that table which was a long narrow one. She said, “I have sent eight children to school,” and as I looked around the room, I saw a baby in a high chair and one on the floor. I have a paper clipping from a few years later that tells of the Newcomb’s rejoicing over the arrival of their fifteenth baby. (Mrs. B.J. McKerchie, 302 Easterday Avenue)

In 1854, the horse cars transferred the freight and copper from the head of the old canal to the company warehouse that now stands opposite Mrs. Jay Hursley’s home on Water Street. They passed our home, which stood where the Supe blocker now stands, on the corner of West Portage and Ferris Streets. (J.E. LaLonde, 506 Division Street)

The first bank was opened for business by Mead and Fowle, the well-known and successful bankers on Water Street. The building stood in the spot where Ashmun Street now opens onto Water Street. This institution marked the beginning of real progress and was a signal to go ahead. (B.F. Kelly, 217 Johnstone Street)

On March 25, 1872, we left for Petoskey with the tug Mystic, of which L.P. Trempe was the owner. Captain Joe Taylor was a master. They were all Captains, and there were no deckhands on board. Among them were Fred Trempe, Joe Roudleau, and a few of the men from the Sault, such as Thomas Ryan Jr., Gus Trempe, Alex Guerno, Ford Hursley, Chauncey Montgomery, and Dr. Gable. We had nothing to eat except fish and potatoes, so Mr. Trempe sent the Mystic for provisions. We brought back pork, flour, and all kinds of groceries and a live ox for Thomas Ryan’s butcher shop on Water Street. We didn’t encounter any ice except in the Straits of Mackinac. (Captain Aley Day)

Charles Chapman looked like the picture that was printed of him in the news a few days ago. At that time, he was the President of the Working Men’s Union. I well remember meeting him at the Standard Theatre on Court Street, where the Baptist Church is now located. (R.L. Mitchell, Hay Lake Road)