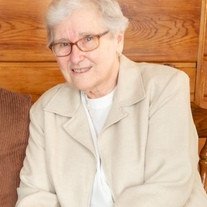 Dana grew up in Garnet, Michigan and graduated from LaSalle High School in 1947.
She began working for Michigan Bell shortly after graduation. She married her high
school sweetheart, Donald J. Goudreau on September 30, 1947 in St. Ignace, Michi-gan.
After working and raising 11 children, she retired from Michigan Bell. During her career,
she earned many recognitions, one of the most cherished was the award for her
seventeen years of perfect attendance.

In addition to working and being a mother, Dana was very active as a volunteer in the
community. This includes serving as a Hospice volunteer, Cub Scout Leader,
Ecumenical Minister, Engadine Band Booster member and working on the local elec-tion
board. She also volunteered to drive folks to their hospital appointments when they
were unable to drive. Her children/grandchildren continue to follow her path and build
on her legacy of service to others.