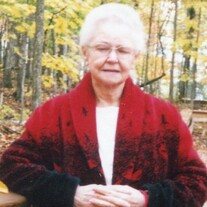 Wilda grew up in Pennsylvania. She attended school in a one room schoolhouse and was close with all her classmates all the way through school and all through her adult life. She married Howard E. Mars on January 30, 1952. She was a registered nurse her entire career and retired in 1992 from Cheboygan Memorial Hospital in Cheboygan, Michigan.

Wilda loved spending time with her husband Howard, and they enjoyed the outdoors. They loved picking morels on their property in Wolverine, Michigan where they made their home, gardening, and spending time with their children, grandchildren, and great-grandchildren. In October of 2019, she met her great-great granddaughter. She also enjoyed making stained glass windows and lamps. Wilda was a wonderful woman and will be greatly missed.

A memorial service will be announced at a later date.

Memorial Contributions may be made out to the ALS Association, PO Box 37022 Boone, IA 50037 or the American Cancer Society, Northeast Michigan and U.P. Office
1480 West Center Road, Suite 1, Essexville, MI 48732.