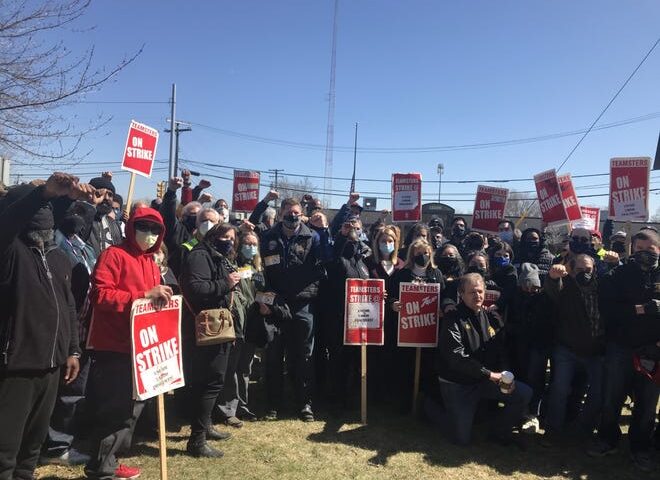 About 80 Teamsters members received some high-profile support Saturday when several members of Michigan’s congressional delegation joined them on the picket line outside the 7 Up warehouse in Redford Township.

Democratic U.S. Reps. Rashida Tlaib of Detroit, Haley Stevens of Rochester Hills, Debbie Dingell of Dearborn and Andy Levin of Bloomfield Township joined members of Teamsters Local Union 337 on the 10th day of the union’s strike against 7 Up and its parent company Keurig Dr Pepper. .

Tlaib, Stevens and Dingell joined the strike at noon and stayed for about an hour.

“You all deserve to be able to provide for your family,” Tlaib told the crowd. “You shouldn’t have to beg them to do the right thing.”

Said Dingell:  “We gotta make it really clear how simple these issues are. People are not being paid the same amount of money for the same job.”

Teamsters Local Union 337 began its strike  at 8:30 p.m. March 11, after months of negotiations surrounding a two-tier pay system for warehouse workers and drivers at 7 Up. The pay scale means that people working the same job are paid different rates — workers that joined the company prior to 2005 are paid more than workers that joined after 2005.

“They gave us a last best and final offer, and we had the option to accept that or strike, and the contract offer was overwhelmingly turned down, and it was the second time it was turned down, so the membership decided it was best to strike,” Teamsters Local 337 recording secretary and business agent Tony Reisdorf said.

“The fact that they are coming together, no matter their diversity and their background, this shows the power of the union,” Tlaib told the Free Press.

Strikers were also protesting to get Martin Luther King Jr. Day off. To this, vice president of corporate communications, Vicki Draughn, said union workers had an option in their contract negotiations for nine paid holidays. On this list was MLK Day, which is a paid holiday in other Keurig Dr Pepper locations, including union locations.

“During negotiations, Teamsters Local 337 are able to select MLK Day as one of their nine designated pay holidays, as has been done at many other pay company sites,” Draughn said.

Draughn said the offer made to union workers didn’t affect pay structure; it increased pay across all tiers.

The Teamsters said they were also striking because the company wanted to start using drivers without commercial driver’s licenses to cut costs. Currently, all drivers are certified and drive tractor-trailers, but Reisdorf said 7 Up wants to use non-CDL A drivers with commercial vans.

There has been one police incident since the beginning of the strike. A man went up to a striker and harassed him. Police reported that the man was not a member of the company or part of 7 Up’s hired security personnel.

Reisdorf said hired security has flashed lights, followed strikers to their cars and used other methods to scare strikers.

“Those intimidations create an unsafe environment for these workers to strike,” Tlaib told the Free Press.

Draughn said the company had a “contingency plan” in place in case of a strike, and the warehouse has brought in teams from other locations to fill in.

Reisdorf also said Teamsters were financially prepared for this, because of the recently passed stimulus check, tax benefits, union funds and savings.

“We’re really in a pretty good position, and the guys have prepared for this moment. They’ve been saving,” Reisdorf said.

Dialogue between the union and company is set to continue.

“We don’t want to be in this strike so we’re inviting the union to return to the negotiations table,” Draughn said.

Tlaib said lawmakers are currently debating the Protecting the Right to Organize Act, which speaks to the issue at hand.

“We are pushing the PRO Act, which passed the House and is in the Senate, which really protects workers like this, that are doing this fair share, showing up to work, but not being treated equally in the workplace.”