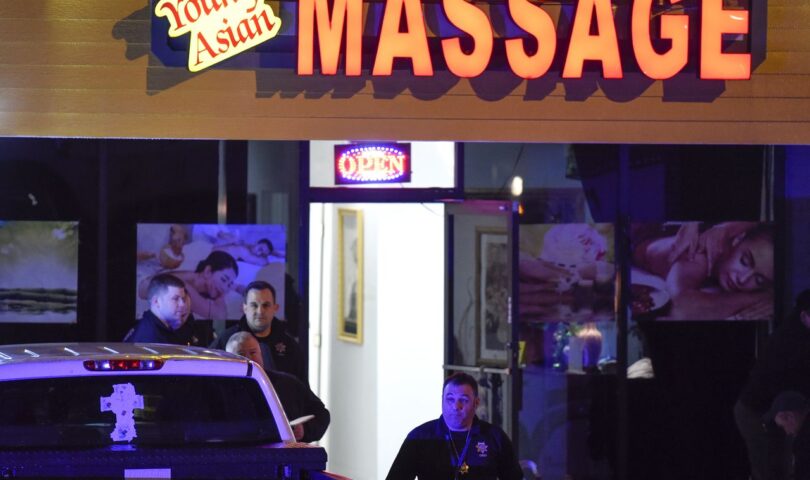 ATLANTA (AP) — A white gunman was charged Wednesday with killing eight people at three Atlanta-area massage parlors in an attack that sent terror through the Asian American community, which has increasingly been targeted during the coronavirus pandemic.

A day after the shootings, investigators were trying to unravel what might have compelled 21-year-old Robert Aaron Long to commit the worst mass killing in the U.S. in almost two years.

Long told police that Tuesday’s attack was not racially motivated. He claimed to have a “sex addiction,” and authorities said he apparently lashed out at what he saw as sources of temptation. But those statements spurred outrage and widespread skepticism given the locations and that six of the eight victims were women of Asian descent.

The shootings appear to be at the “intersection of gender-based violence, misogyny and xenophobia,” said state Rep. Bee Nguyen, the first Vietnamese American to serve in the Georgia House and a frequent advocate for women and communities of color.

Atlanta Mayor Keisha Lance Bottoms said that regardless of the shooter’s motivation, “it is unacceptable, it is hateful and it has to stop.”

“He apparently has an issue, what he considers a sex addiction, and sees these locations as something that allows him to go to these places, and it’s a temptation for him that he wanted to eliminate,” Cherokee County sheriff’s Capt. Jay Baker told reporters.

Baker drew criticism for saying Long had “a really bad day” and “this is what he did.” A Facebook page appearing to belong to Baker promoted a T-shirt with racist language about China and the coronavirus last year.

The Facebook account featured numerous photos of Baker going back months, including one of him in uniform outside the sheriff’s office. The account was deleted Wednesday night, and Baker did not immediately respond to voicemails and an email seeking comment. The sheriff’s office also did not respond to a message.

Meanwhile, Sheriff Frank Reynolds said it was too early to tell if the attack was racially motivated — “but the indicators right now are it may not be.”

The Atlanta mayor said police have not been to the massage parlors in her city beyond a minor potential theft.

“We certainly will not begin to blame victims,” Bottoms said.

The attack was the sixth mass killing this year in the U.S., and the deadliest since the August 2019 Dayton, Ohio, shooting that left nine people dead, according to a database compiled by The Associated Press, USA Today and Northeastern University.

It follows a lull in mass killings during the pandemic in 2020, which had the smallest number of such attacks in more than a decade, according to the database, which tracks mass killings defined as four or more dead, not including the shooter.