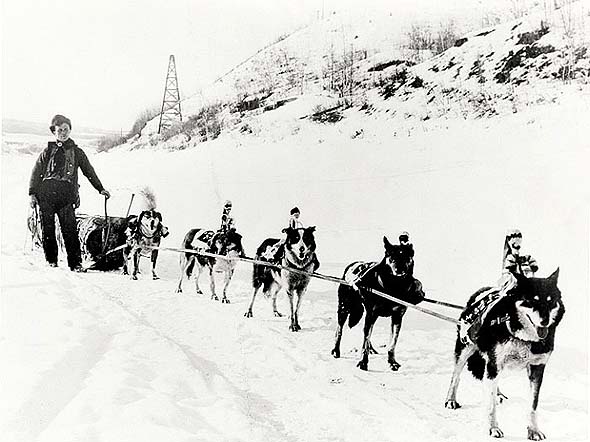 We used to gather in the old Soo to celebrate the fourth of July. Some walked, some came on horseback, some in wagons, and more by boat. About 10 a.m., someone mounted a barrel and read the Declaration of Independence. Later, we gathered at the riverfront to see the boat races. The races were generally won by John Bousha. The old Soo would ring with yells from the shore as the winners passed the stake with their paddles up in the air. Then there was a swimming contest at the docks, and the swimmers were clothed in “nature’s swimming suits.” We would then come uptown to Water Street and have foot races, broad jumping, and many other events. (J.W. Welsh)

Tom Mead had a curio store on Water Street. Agates, birch bark work, Indian moccasins, etc. Wild animals in cages upstairs, three stuffed bears outside in front. Mead had a double-barreled shotgun and would stroll up the corduroy road (from First National Bank to Ridge Street now) to the old well (now the entrance to the Bacon Drug Store) and shoot into the flocks of pigeons passing over. Fred Rosch, some other boys, and I picked them up, and when Mead had the few he wanted, we got the balance. (James R. Ryan)

I remember when the Lake Fleet was made up of sailing vessels towed through the river by tugs fueled with wood. Those were the days of sailing. I can recall most names of the boats. (F.W. Roach)

I remember when all the men, women, and kids, crossed the Weitzel lock to see a daredevil in an inflated rubber suit float down the rapids. All we could see was a black speck holding an American flag, escorted by Indian canoes. I remember the Indians had to fish the swimmer out before he reached the foot of the rapids. (Herbert C. Ryan)

The Prenzlauer Brothers had the main dry goods store near Water Street, where old daddy White kept a little candy shop and J.L. Kipsett ran a blacksmith shop. I also remember when the old pioneers had to take a sailboat to get to the Sault for provisions, as there was no road. (William Follis, 817 Bingham Avenue)

I remember a large boulder in our yard, the largest that anyone had ever seen. It was outlined with various shapes and figures. I imagine it was somewhat like the Pictured Rocks. It was a great curiosity for strangers. The tourists, after viewing the locks, usually walked over to Ridge Street to see the boulder, wishing it could be moved to their home grounds in the city where they lived. When they were building the Iroquois Hotel, the mason’s decided they would like to have that stone in the foundation. They built huge fires on it for several days, breaking it into small pieces. They hauled away ten cords of stone from that one boulder. They said there was almost as much under the ground as above. An Elm tree was planted in its place, and it has grown to be a large-sized tree. (Mrs. Mary C. Bernier, 224 Ridge Street)

I remember 40 years ago the old log house which was my home. It stood where the Great Lakes Laundry stands today. The Indians used to come from the Mission to vote here at that time. I also remember when they laid all over our floor, for there were too many of them to furnish beds. My father, Leo Bonno, was in charge of them. (Mrs. Neil Parr, 1051 Cedar Street)

I remember seeing a team of about ten dogs dashing down Main Street in St. Ignace. The dogs drew a large sled piled high with mail sacks. A board on each side of the sled bore the words, “Le Sault de Ste. Marie.” It was the Sault mail team off on its sixty-mile dash. It made a proud showing, as with the crack of the whip and the driver’s cry, “Mush-on,” it raced down the main street of what was then the Sault’s rival town. I can also remember if you wanted to make a trip from Grand Rapids to the Sault in the summertime, you took a train from Grand Rapids to Petoskey, which was then the terminus of the Grand Rapids & Indiana railway. From Petoskey, you took a boat plying from Chicago to Lake Superior if you were in luck with your dates. If you were out of luck with the Chicago boat, you could take the steamer, Van Halt, to Macklnac Island. Then you had a double chance of the Chicago boat or a boat running from Buffalo to Lake Superior. The Van Ralt had a high-pressure engine, her exhaust pipe was carried up just back of the smokestack and curved back at the top. Blowing clouds of white steam, back over the stern, was supposed to give the boat the appearance of greater speed. Doubtless, some thought that she too made a fine showing of rapid transit. I suppose she made ten or twelve miles an hour. (R. G. Hulbert)