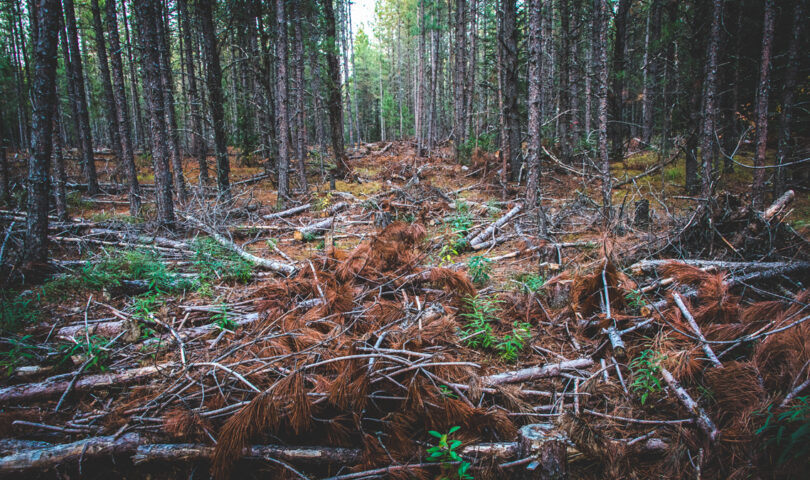 Mr. Seymour’s sawmill and lumber yard extended from Spruce Street to the riverfront. The lumber dock and tramways were about where the water power is now. I used to go and pick up chips for firewood. I lived in Dr. O’Neil’s cottage on Maple Street. We bought our drinking water in barrels, two for a quarter. Mr. Parr drew it from the slip. There was a penstock in Mr. McGinne’s yard, but only they were allowed to use it. There were no sewers at that time. All the property on Spruce Street were stumps and swampland. Where the Cornwell Beef Company now stands, we were offered lots for $15.00, but my husband would not buy. A few years later, the same lots sold as high as $4,000 to $6,000, then we were very sorry. North of Spruce Street, the city was covered with tents, some were boarding houses, some were dwellings, others stores. There were not enough buildings to accommodate the people in town that year. We bought sugar for $4.00 per 100 pounds, ham at 10 cents a pound, bacon for six cents a pound, flour for $3.50 a barrel, soft coal for $4.00 per ton, and hardwood for $3.50 a double cord. Ashmun Street was a rough, muddy road, with deep ditches on each side. I remember going to a funeral on the hill, and I thought I would never get there. Coal Pit Hill was a terror to me. Water Street was the main street then. There was a footpath from Johnstone Street to the Chippewa Hotel, the largest hotel in town. I also remember “Teapot Johnny.” Many times I gave a piece of pie to poor Narcisse. (Mrs. J. DesChaine, 1104 John Street)

I remember when they surveyed the old state lock and when they first started work digging the clay and stone. The work was all done by men, for they did not have steam shovels or steam derricks. The dirt was carried out of the hole by what was called “two-man barrows”. They were made something like stretchers. Toward the end of the job, they had mules haul the dirt away. The stone was drilled by one man holding a drill while another hammered with a large sledgehammer. (Capt. Wm. Frechette, 914 Maple Street)

There wasn’t an opera house here, and we used to have the theatres in the old skating rink. The rink was in Ashmun Alley, where Belanger’s Livery is now. When it rained, we watched the show with our umbrellas up. (Sophie Buck Andrews, Pasadena Apartments)

I landed in the Sault, in the spring of 1882, on the steamer called the “Francis Smith.” All of the businesses in the Sault were down on Water Street, except a small grocery store owned by P.C. Kelliher, located about where the Hub is now. I remember when Donald McKenzie ran the leading hotel which was also on Water Street. There was no railroad here at that time. (W.P. McDonald)

Jimmy R. Ryan’s remembrance of old times in the paper of January 31, about the spring and summer shaves, and haircuts, at the old Chippewa House Shop, and the mention of Billy Meyers Shop, brought to my memory the time Billy opened his shop. We were young sprouts, and to make us look more manly, we were very anxious to grow hair on our face, particularly a long silk mustache. Jim saw signs, and his uncle told him if he would start to shave, it would encourage them. So he went to Billy’s shop and ordered a man-sized shave. After Billy had prepared him to sit comfortably, he began sharpening up an extra razor. When Billy seated himself by the window and started to read the almanac of 1868, Jim got tired of waiting and said, “Billy why don’t you shave me?” Why? Billy said, “I am waiting for the hair to grow.” (Fred W. Roach, 232 Ferris Street)

The beach in front of old Fort Brady came up to the foot of the bluff on which the monument stands. The Fort was enclosed by a stockade of high pointed posts. In 1856, I came here from Ft. Ontario N.Y. My father, Sgt. Galley, came here to take charge of Fort Brady. The soldiers occupying the fort were being moved to Fort Mackinac. From that time until after the Civil War, a period of about 11 years, there were no soldiers stationed at Fort Brady. The most important event that happened during that time was the visit of General Sherman and General Ord in 1866. My father always fired a salute to the first boat on its arrival in the spring, and also fired the cannons, and raised the flag on every 4th of July and Washington’s birthday. (Mrs. B.F. Kelly, 217 John Street)

I remember one of the various ways of raising funds for church affairs forty years ago. Church bazaars seemed to be one of the most popular. I have in mind one held in a building on Water Street. It was looked forward to by young and old, and all clans. The booths were filled with beautiful handmade articles. The supper tables were loaded with many good things. The tourists who came to the Soo, in large numbers, usually came to the bazaars and joined in the merriment and also helped swell the fund. And if Dr. Ennis happened to be present, with his ready wit and humorous sayings, he always added to the pleasure of the evening. Many of the ladies, who were active workers at that time, are still living in the Soo. My memory lingers around the days of the old-time bazaar.  (Mrs. Mary C. Bernier, 223 Ridge Street)