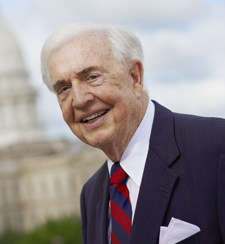 Frank Kelley, the state’s attorney general from 1961-98 and perhaps the most popular politician in Michigan history, died Friday night at the age of 96.

Mr. Kelley was appointed attorney general in 1961 by Governor John Swainson to fill a vacancy and from there defined the job for a generation. He set up the nation’s first consumer protection and environmental protection divisions in a state attorney general office and championed civil rights issues.

A Democrat, Mr. Kelley was elected attorney general 10 times, and any Republican nominated to challenge him was always seen as nothing more than a sacrificial lamb, so popular was Mr. Kelley with voters.

“Frank Kelley was my first mentor in state government and what a teacher he was, with an Irishman’s gift of humor and a fierce heart for the average working person,” former Governor Jennifer Granholm said in a statement. “When I was governor, Frank would pop into my office every few weeks with humorous advice on how to fight and who to fight. He wasn’t one to back down whether it was wrangling with the utility companies or corrupt officials. No wonder he held the record as the nation’s longest serving attorney general for so many years. Voters loved him and he loved them back. And I loved him, too.”

So popular was Mr. Kelley that he might have delivered the decisive moment that got Ms. Granholm elected in 1998 as his successor with a television commercial wholeheartedly endorsing her and slamming negative commercials by Republicans as garbage. In a year when Republicans otherwise swept to victories, Ms. Granholm eked out a close win.

Governor Gretchen Whitmer’s mother worked at the Department of Attorney General during Mr. Kelley’s tenure, and in 2000 when she ran for the state House for the first time, Mr. Kelley was her campaign treasurer.

“Frank J. Kelley was one of my absolute favorite people from whom to get advice, perspective, or humor,” she said in a statement. “He was a never-ending fount of wisdom and fun. From his college days to the battles he fought as Michigan’s longest-serving attorney general, he always had stories and insight into the human condition and generosity of time. I know I am among countless, fortunate people who had the honor of working with the brilliant and irascible Frank J. Kelley. He will be missed but his mark on Michigan will be felt – as generations were benefited by his leadership. His endorsement of and counsel to candidates like me meant as much to us as it did to the public we hoped to serve. I’ll forever be grateful to my friend, Mr. Kelley.”

Despite his record-setting tenure, Mr. Kelley could have run for one more term under term limits in 1998 but opted to retire, saying he thought it best to leave when he was still wanted.

“Frank was one of the most kind-hearted, honest, ethical persons I have ever known, in both his public service and in his 15 years of practice with me in the private law sector,” he said. “He was a true legend, recognized as such across the nation and deservedly so.”

“Frank Kelley didn’t just serve as Michigan’s attorney general longer than anyone in state history – he really invented the office in its modern form. adding consumer protection and environmental divisions before other states had them, and was a fierce defender of civil rights and the godfather of many a career, from Governor Jim Blanchard to Governor Jennifer Granholm,” he said. “Most of all, he was defined by the title of our book — The People’s Lawyer.”

“He belongs to an era of civility, decency, non-partisanship and respect for others and the rule of law,” he said. “Frank ran his Attorney General’s Office with integrity and honor for four decades. Frank Kelley was a pioneer in consumer protection and environmental protection, indeed among the first champions in the United States. Frank Kelley was a mentor to thousands of young lawyers, judges and aspiring public servants. I was one, and I will be forever grateful for Frank’s help, support and lifetime of friendship.”