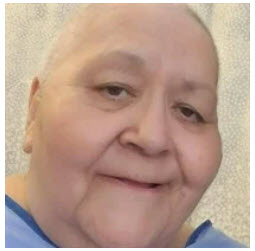 Christine F. LeBlanc, 72, of Brimley, MI, passed away Monday March 8, 2021 at War Memorial Hospital after a yearlong battle with cancer. She was born August 30, 1948 in Sault Ste. Marie, MI to Bernard and Catherine Shaw.

Christine is predeceased by her parents, Bernard and Catherine Shaw; sister, Pat Easton; and her brother Clifford Shaw.

Christine graduated from St. Joseph Academy, Adrian, MI, in 1967 and worked in the Detroit area until she moved back home. She worked at being a Community Health Representative for Bay Mills Indian Community and volunteered many years on the ambulance. She later worked as the dispatcher for the Bay Mills Tribal Police until she retired.