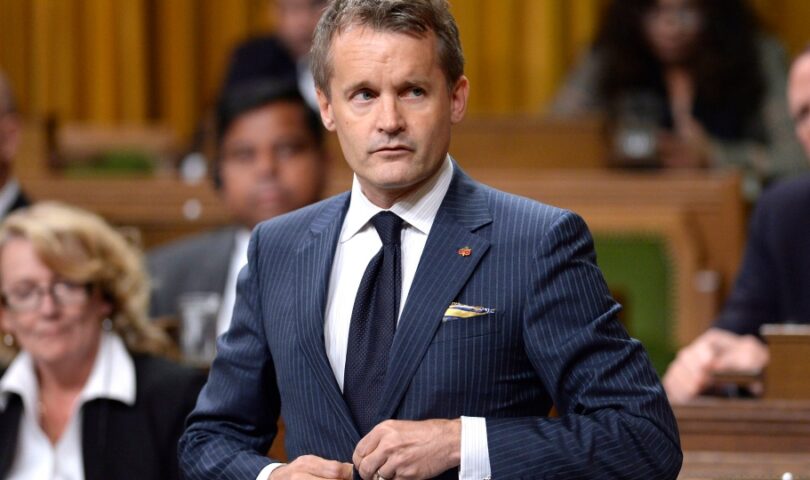 Canada isn’t taking “no” for an answer when it comes to the Line 5 oil and gas pipeline.

Gov. Gretchen Whitmer in November announced plans to revoke the 1953 easement allowing the controversial, 68-year-old twin pipelines to operate on the Straits of Mackinac lake bottom. Canadian oil transport giant Enbridge, which owns and operates Line 5, then announced its intention to defy Whitmer’s order to cease operation by May.

On Thursday, Canada’s natural resources minister told a committee of the House of Commons he believes Line 5 will remain operating over Whitmer’s order.

“We are fighting for Line 5 on every front and we are confident in that fight,” Seamus O’Regan told a special House of Commons committee on Canadian-U.S. relations, as quoted by the Canadian Press.

“We are fighting on the diplomatic front, and we are preparing to invoke whatever measures we need to in order to make sure that Line 5 remains operational. The operation of Line 5 is nonnegotiable.”

O’Regan called Line 5 “very different” from the Keystone XL pipeline in the U.S. Plains states that President Joe Biden shut down on his first day in office. But he didn’t elaborate on the differences.

Line 5 moves 23 million gallons — about 540,000 barrels — of oil and natural gas liquids per day east through the Upper Peninsula, splitting into twin underwater pipelines through the Straits, before returning to a single transmission pipeline through the Lower Peninsula that runs south to Sarnia, Ontario.

The pipeline, and particularly its more than 4-mile underwater section in the Straits, have for years been a source of contention.

Enbridge was responsible for one of the largest inland oil spills in U.S. history — a major leak on one of its large oil transmission lines near Marshall in July 2010. That spill fouled more than 38 miles of the Kalamazoo River and took four years and more than $1 billion to clean up. Enbridge in 2016 agreed to a $177-million settlement with the U.S. Justice Department and Environmental Protection Agency, including $62 million in penalties, over the Marshall spill and a 2010 spill on another of its pipelines in Romeoville, Illinois.

A similar spill disaster on Line 5 in the Straits would devastate the Great Lakes, shoreline communities and the Michigan economy, critics of the pipeline have long contended. Enbridge officials have countered that Line 5 is safe — despite findings of anchor strikes, missing supports and lost protective coating over recent years.

Canadian officials say Line 5’s supplies are critical to the Canadian provinces of Alberta, Ontario and Quebec — and Enbridge officials are quick to note that the pipeline carries vital supplies for Michigan and Ohio as well, pushing back on the argument that the pipeline for the most part carries petroleum from Canada to Canada, using Michigan as a shortcut bearing the risk of any spill.

Whitmer’s office did not respond to Free Press requests for comment Monday on O’Regan’s statements.

In announcing her intention last fall to revoke Enbridge’s easement, Whitmer cited the company’s failure to follow safety provisions within the agreement.

“Enbridge has routinely refused to take action to protect our Great Lakes and the millions of Americans who depend on them for clean drinking water and good jobs,” she said. “They have repeatedly violated the terms of the 1953 easement by ignoring structural problems that put our Great Lakes and our families at risk.

“Most importantly, Enbridge has imposed on the people of Michigan an unacceptable risk of a catastrophic oil spill in the Great Lakes that could devastate our economy and way of life. That’s why we’re taking action now, and why I will continue to hold accountable anyone who threatens our Great Lakes and fresh water.”

Enbridge filed a federal lawsuit challenging the order shortly after it was issued. Vern Yu, Enbridge president for liquids pipelines, gave a point-by-point-response to the state’s termination notice in a letter in January and said the company would not close Line 5. Enbridge officials believe it is the sole discretion of the federal government to regulate interstate oil and gas pipelines. The U.S. Pipeline and Hazardous Materials Safety Administration oversees such pipelines nationwide, and has declared Line 5 in the Straits safe to operate as recently as last fall. But whether PHMSA’s authority overrides Michigan’s property and public trust rights will likely fall to courts to decide.

“Our dual pipelines in the Straits are safe, fit for service and in full compliance with the federal safety standards that govern them,” Yu said.

O’Regan, during his comments to the House of Commons committee, was asked whether he believed Whitmer’s Line 5 concerns have any merit.

“No, I do not,” he replied. “This is a safe pipeline. It has always been a safe pipeline, (and) the owner is taking further measures to make sure it has continued safe operation.”

Enbridge is working on a more than $300 million plan for a tunnel under the Straits of Mackinac lake bottom, into which a new Line 5 pipeline would be placed and operated. That proposal has not yet received all necessary state and federal approvals.

Conservative Canadian member of Parliament Mark Strahl noted that the concerns over Line 5 seem to mirror those over the controversial Keystone XL pipeline.https://fcaff6f9467e51b8f520f4ecc8ed3259.safeframe.googlesyndication.com/safeframe/1-0-37/html/container.html

“Canadian officials weighing in on Line 5, despite their lack of understanding of the issue — and despite their recent decisions not to allow other pipelines to move oil on their land — is the definition of hypocrisy,” she said.

“Gov. Whitmer made the decision to revoke this state easement and to prioritize our public trust resources to protect our way of life, our drinking water, our Great Lakes economy and our wildlife. This decision sits with the state of Michigan — not the Biden administration or Canadian officials. It is a land contract with Michigan that Enbridge has consistently violated.”

Resolution of the dispute will indeed likely come down to negotiations between Michigan and Enbridge, said Kirsten Hillman, Canada’s ambassador to the U.S.

“Line 5 is a crucial piece of energy infrastructure for Canada, but also for the United States — that is a core and principle message message that we’re giving,” she told the House of Commons committee last week.