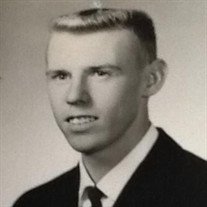 Arnie grew up in the Upper Peninsula and graduated from Rudyard High School. After graduation, he was drafted into the United States Army, to serve during the Vietnam War era. After the war, Arnie returned to his hometown of Rudyard and started working for his cousin Denny, on cars and auto repairs. It sparked a lifelong love of automobiles in Arnie and he pursued his own auto body shop. He began running his own mechanic shop on his home property where he took care of many different vehicles with expertise.

Arnie was a man of few words but was loved by everyone who had the pleasure of meeting him. He was a simple, hardworking man. Arnie was known for his love of antique cars. He also knew the ins and out of many antiques and their histories.

Arnie is preceded in death by his parents.

A graveside Memorial Service for Arnie will be held May 8, 2021 at Dondaldson Cemetery in Dafter, Michigan. There will be a Military Honor Guard service at 11:00 a.m.

The family would like to say thank you to the Hospice House in Sault Ste. Marie and a special thank you to Kristy Curtis for taking such great care of Arnie.