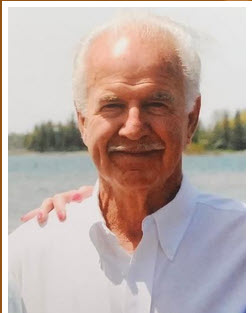 E. James “Jim” Mertaugh, 89, of Hessel, Michigan, earned his Eternal Reward early Tuesday evening, February 2, 2021, at Pennington Home, Pickford.   Eugene James Mertaugh  was the youngest child born October 13, 1931, in Sault Ste. Marie to parents the late Eugene Joseph and Helen Catherine (Bailey) Mertaugh.  He was a graduate of Les Cheneaux Community Schools and served his country in the United States Coast Guard.  On November 26, 1955, Jim was united in marriage to Ella May “Elly” Nelson at St. Joseph Catholic Church, Sault Ste. Marie and their marriage was blessed with four children.  They resided in Hessel where they they raised their family.  Jim worked with his father, Gene, brother, Jack, and sons, Danny and Tommy in the wooden boat restoration business, E. J. Mertaugh Boat Works in Hessel.  This business grew significantly from the time it became the country’s first ever Chris-Craft dealer at the advent of recreational power boating in America.  Jim and Jack assumed the reigns of E.J. Mertaugh Boat Works from Gene in 1970.  They continued to grow and diversify the business from one that looked after what were once considered the area’s “old wooden boats,” into one that preserved and restored those boats.  Jim was an expert preserver and restorer not only to family’s who owned these boats in the Les Chenueax Islands but to those all over the world.  Jim retired from E. J. Boat Works and after a brief period of time, launched Classic and Antique Boats, LLC of Hessel in 2003 with his sons, Tommy and Danny beside him.  Though they began by continuing to preserve the area’s increasingly important classic boats, they evolved into one of the country’s most respected wooden boat restoration shops, with some boats winning national, best-of awards. Beyond restoring many boats into far-better-than-new condition, the expertise and caring of Jim and his sons kept classic boating — boats 30, 40, and up to 100 years old — safe for dozens of families in the area. Love for, talent and great expertise in classic boats were in Jim’s, Danny’s, and Tommy’s blood. They became essential not just to preserving the area’s boats, but to preserving the connection between those boats and generations of family who enjoyed them. Those families trusted Jim and his sons, in a business where trustworthiness makes or breaks the connection between a boat owner and his/her boat. For some of those families, that lineage of trustworthiness began when Gene sold them their first boat in the 1930’s. For others, it began at some point during the 80+ years of the Mertaugh family continuity in the boating business.  Jim and his sons leave behind a wonderful legacy in the area. One that will be sorely missed by so many, yet one that will live on and be renewed each spring when the boats once again roar to life.   Surviving are his daughters and sons-in-law, Amy and Robert Paczkowski of Cedarville and Erin and Jason Brooks of Canton, Michigan; his granddaughter, Megan (Trevor) Bouwens of Grand Ledge, Michigan; his three great-grandchildren, Addison, Bexley and Cylus; his daughter-in-law, Judy Mertaugh and her daughters, Shelby and Jaycee; nieces, Missy DeWick and Margo (Hunter Kovalski) Mertaugh and his nephews, Tim (Bonnie Mickelson) DeWick and Brian (Elisabeth) DeWick: a special friend, Marcie Waggoner.    Jim was preceded in death by his wife, Elly in 1996; his sons, Thomas “Tommy” Mertaugh in 2013 and Daniel “Danny” Mertaugh in late 2020; his son-in-law, Mark Izzard, siblings Frances (Lee)  DeWick, John “Jack” Mertaugh and Robert Mertaugh, and nieces, Maeve Fitzgerald and Kerri Mertaugh.   The family will receive relatives and friends at Our Lady of the Snows Catholic Church, Hessel from 2:00 until 2:45 p.m. Friday, February 5, 2021, with pandemic guidelines followed. A Funeral Mass will be held at 3:00 p.m. Friday in the church and may be viewed at https://www.facebook.com/4.as.1.FaithCommunity/live   The Rev. Fr. Ben Paris will officiate..  A graveside service and military rites will be held in the Spring at Cedar Cemetery and will be announced.  In lieu of other expressions of sympathy, memorial donations are suggested to Hospice of the EUP, 308 West 12th Avenue, Sault Ste. Marie, MI 49783 and/or Clark Twp. Ambulance Auxiliary, PO Box 453, Hessel, MI 49745.   Pallbearers will be Jason Brooks, Bob Paczkowski, Trevor Bouwens, Dave Carie, Paul Tassier and Tom Sayles.   The family expresses their sincere appreciation to Pennington Home and Hospice of the EUP for the loving care of Jim in his final days. Condolences may be expressed and a photo tribute viewed at www.ackermancares.com.   Arrangements are in the care of Raymond B. Ackerman, Jr., Funeral Director (877) 278-1134 with the assistance of C. S. Mulder Funeral Home, Sault Ste. Marie.