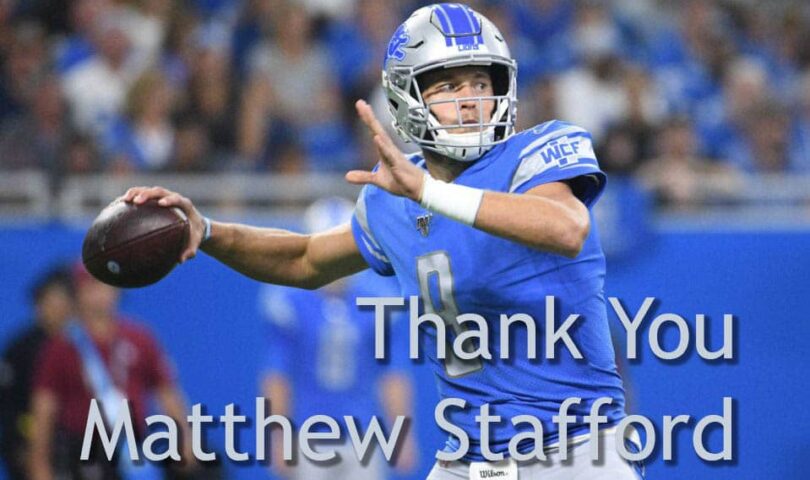 Matthew Stafford has spent his entire NFL career trying to rebuild the Detroit Lions franchise —  he was due for an upgrade and he just found one. In a blockbuster trade, the Lions sent Stafford to the Los Angeles Rams in exchange for the Rams’ first-round draft picks in 2022 and 2023, a third-round pick in 2021, and quarterback Jared Goff, CBS Sports NFL Insider Jason La Canfora confirmed. Stafford moves on from a Lions team he struggled to reach the postseason with to a Rams team led by coach Sean McVay that has advanced to at least the divisional round and once the Super Bowl in two of the last three seasons.

Stafford and the Lions had mutually agreed to part ways earlier in the week, with the team moving in a new direction under new general manager Brad Holmes (who until earlier this offseason was the Rams’ director of college scouting) and head coach Dan Campbell. Stafford heads to a ready-made contender in the Rams, who have had one of the NFL’s best defenses for several seasons and had previously been one of the league’s most explosive offenses before Goff’s backslide over the past two years.

Stafford — who spent a decade in Detroit and departs as the Lions’ all-time leader in completions (3,898) passing yards (45,109), passing touchdowns (282), and quarterback wins (74) — took the franchise to three playoff appearances in his tenure, but the team failed to win a playoff game, going 0-3.

In the world of sports, a blockbuster trade can strike at any time and that’s exactly what happened when the Detroit Lions agreed to deal franchise quarterback Matthew Stafford to the Los Angeles Rams for Jared Goff and three future NFL draft picks. After the dust settled, the Rams sent Goff, their 2021 third-round pick, their 2022 first-round pick and their 2023 first-round pick to the Lions for Stafford.

It didn’t take long for first-year Lions general manager Brad Holmes to make a big splash. Holmes came to Detroit from Los Angeles where he was the director of college scouting with the Rams from 2013-2020 — so it’s safe to say he an excellent idea about what the Lions will be getting in return with Goff as their new quarterback. This trade also carries a significant financial impact from a salary cap standpoint. Per NFL Network’s Tom Pelissero, the Rams will inherit the two years, $43 million remaining on Matthew Stafford’s contract. The Lions will inherit four years, $106.6M remaining on Jared Goff’s contract. The Rams will carry a $22.2M dead cap hit in 2021 after trading Goff and the Lions will carry a $17.8 million dead cap hit in 2021.

Now that the deal is in the books, it’s the perfect time to assign trade grades for both sides.

When Stafford’s name first surfaced on the trade market, the expectation was the Lions would be able to acquire a first-round draft pick as compensation for dealing him. At no point did anyone mention anything about two first-round draft picks and a third-round pick. The two premium draft picks and the extra third-rounder will allow Detroit to rebuild their roster via the draft — no more patchwork rebuilds. This will be music to Lions fans everywhere as the roster has failed to commit to a full rebuild for the last decade. Of course, the Lions also acquired Jared Goff and his massive contract in addition to the three draft picks. Goff, still just 26 years old and two years removed from winning the NFC conference, may or may not be in Detroit’s long-term plans. His contract carries an out prior to the 2023 season, but the Lions can also move on from prior to the 2022 season — though that will be costly. Goff has a $32.95 million cap hit in 2022 with $15.5 million guaranteed, per OverTheCap. Also, per OTC, the Lions can release Goff prior to the 2023 season and incur just an $8.6 million dead cap hit while creating $23.85 million in cap space. Detroit managed to acquire three key picks to help bolster their rebuild the right way for a player who they publicly agreed they would trade just a few days ago.

The Rams have a unique strategy. After completing this trade, they will now go seven consecutive draft classes without owning a first-round pick. Of course, they can trade for one at a later date, but that seems unlikely. The current Rams regime believes in their ability to locate talent on the second and third days of the draft and so they’re willing to make big moves to acquire already developed NFL stars (Jalen Ramsey, Stafford, etc.) using their first-round picks as leverage. However, with their total salary cap number rising, long-term salary cap allocated to stars like Ramsey, Stafford, Aaron Donald and others, and their offensive line aging — they aren’t leaving much margin for error. Trading draft picks also makes it harder to field a deep roster and compete in seasons where the injury luck is not on your side.

Of course, on paper, the Rams just upgrade their passing game and offense overall. Stafford will be an excellent fit in Sean McVay’s wide zone play-action offense. His ability to stretch the field vertically will open up new areas of the field for the passing game while at the same time creating softer boxes for Cam Akers to run through. In the short term, behind an elite defense and with talented skill players on offense, acquiring Stafford could be the boost Los Angeles needs to win the conference. The Rams also deserve a grade bump for dumping the remainder Goff’s contract (and cap hit) on the Lions. Although the Rams will take a dead cap hit on Goff’s deal for 2021, they get it off the books for the 2022 season and beyond. It was always going to be difficult for the Rams to trade Goff this offseason based on his contract, but this creative deal accomplished that while also landing them a major upgrade at QB. It came at a hefty price though.