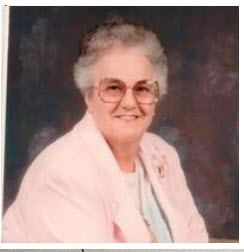 Fern worked at McDonalds Hotel in Trout Lake for 10 years before moving to the Sault. She worked at the Midtown Restaurant, then Scott’s Store, and then Pingatore Cleaners.

In 1971 she went to secretarial school in Marquette and finished a 3-year course in 9 months. She was hired at the Elder Agency and worked in the insurance department and was there until 1980 when she had surgery. She returned to the Sault to recuperate. In 1982 she started the Foster/Shelter Home until she retired in 1996.

She received a Certificate of Achievement from the Chippewa County Family Independence Agency for her service of Children’s Foster Family Care 1982 to 1996. In 1997, she received a Certificate of Accomplishment from Senator Carl Levin for outstanding work in crime prevention. In 1998, she was VFW Auxiliary Buddy Poppy Chairwoman. In 2012, she was Citizen of the year at the VFW Post 3676 Awards Banquet. She belongs to the Brimley VFW Auxiliary 9023.

Her hobby was crocheting. She made hats for HBH, American Legion, VFW, Safe Haven and Jacobetti in Marquette.  She loved to play cribbage, euchre, pool, and bowl.

A memorial service will be held later this year.