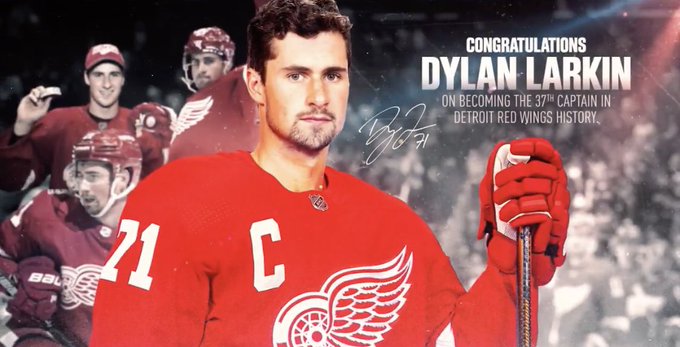 (WXYZ) — Dylan Larkin has been named the next captain of the Detroit Red Wings, the team announced on Wednesday.

Larkin, a Waterford native who played for the USA NTDP and the University of Michigan before turning pro, will be the team’s fourth captain since 1986 and the 37th captain in team history.

“It’s hard to put into words,” Larkin told reporters Wednesday. “I understand the significance of this role, I’ve seen it my whole life…what it means not only to be a Detroit Red Wing, but now be the captain, I couldn’t be more honored. I’ve never dreamt it to be like this, but I’ll just try to be myself every day and have a great support system.”

“Dylan is an extremely competitive and driven player who sets the standard for dedication and conduct for the Red Wings,” Red Wings general manager Steve Yzerman said in a relase. “This is the right time to name our new captain and we’re certain Dylan is ready to take on the responsibility. He will be an outstanding leader for us, both on and off the ice.”

“Dylan has the utmost respect from his teammates because of his work ethic, passion, care for others and burning desire to win,” Blashill said. I have watched first-hand as Dylan has grown as a leader during his time with the Red Wings and internationally at three World Championships representing Team USA. He is ready for the challenges that come with serving as captain and will be complimented by a great leadership group ready to support him.”