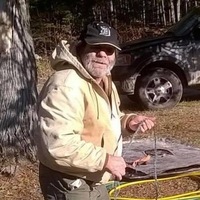 Donald was born on August 18, 1956 in Sault Ste. Marie, Michigan to Bernard and Loretta Mae (Germain) Krull.  Donald was a member of the Sault Tribe of Chippewa Indians.  He enjoyed hunting, fishing, being outdoors, and living on Neebish Island.  He had never-ending adventures, and always managed to “stay under the radar”.  He was a great cook, and loved to have parties.  Donald loved all of his family, and was a legend to all his nieces and nephews.

Donald was preceded in death by his parents; and his sisters: Shirley Nolan, Diane Krull, and Tina Laaksonen.

A private family memorial service will be held at C.S. Mulder Funeral Home and Cremation Services.  A Celebration of Life will be held later in the summer.