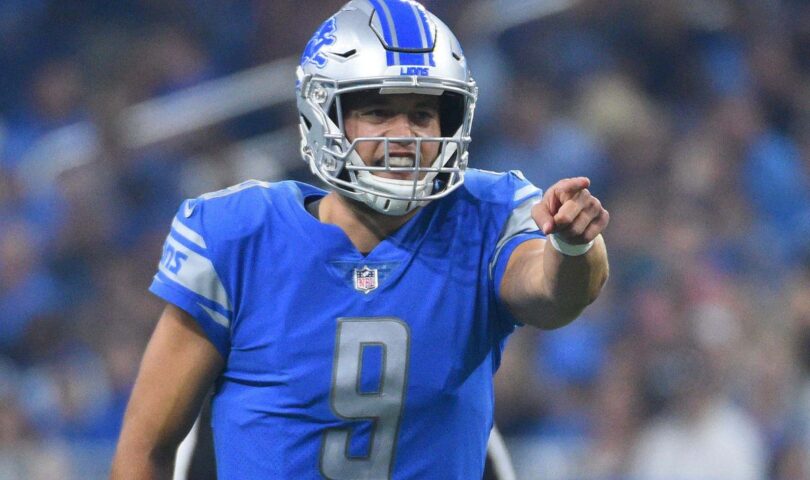 And, it seems, new quarterback too.

Matthew Stafford approached the Detroit Lions requested a trade after the season finale, according to a league source. Stafford suggested a deal could be in both parties’ best interest, and the Lions have agreed to pursue it.

But the Lions did not guarantee a move would happen either, telling Stafford he would be moved if the club finds a “fair market value” according to the source. If such a package does not materialize, Stafford could still return in 2021.

Stafford’s trade proposal occurred before the hiring of new general manager Brad Holmes and head coach Dan Campbell. Both Holmes and Campbell were informed during the interview process a trade was possible, and Stafford conducted a call with both men after they were hired in the last week. All parties agreed to pursue the trade.

“Great player,” Holmes said. “What you really appreciate is, I think the talent is easy to see, but you really appreciate how his intangibles show up on film. Just how urgent he plays, how competitive he is, the toughness he shows. But it is my job to evaluate the entire roster, and through that process I have not had any discussions with Matt or any players for that matter. So I just want to be fair to the process to make sure we evaluate that thoroughly. But obviously, Matt, very good football player.”

More than anything, he was defined by a toughness not often seen at that position. He fought through a multitude of injuries to start 136 straight games during one stretch, the seventh-longest streak ever by a quarterback.

“I’ve never seen anything like it before,” former Lions center Graham Glasgow once told MLive. “He pushes through more things than other people are willing to. He’s just a tough dude.”

Of course, Stafford never did win much either. No playoff games (in three tries), no division titles (in 12 tries), no nothing. It was rarely his fault, and especially in the latter years, when he was saddled with too many bad running games and too many bad defenses. The Lions had a 100-yard rusher just eight times in his career. They haven’t had a 1,000-yard rusher since Reggie Bush. They finished in the bottom three once again this past year, while also allowing the most yards and points in franchise history.

Regardless of how much it was or wasn’t his fault, the reality is the Lions never did win with Matthew Stafford. He was the greatest quarterback the franchise has ever seen, and certainly in modern times, but even that wasn’t enough to solve what continues to ail this organization. And that led many to wonder whether now, with the totally new regime taking over, is the time for both parties to go another direction.

“If they don’t win this year, no matter how he plays, he’s gone,” former Lions quarterback Dan Orlovsky told MLive last summer. “I believe that. He has never said anything — we’re great friends — but we don’t really talk about that. But I can sit here and say I get it. I understand it from both perspectives. I can get it from his perspective — ‘I want to get out, I want my good play to result in more wins.’ But I can understand it from the franchise’s perspective too, that at some point you have to say, ‘It just didn’t work. We’ve done this for a dozen years, and it just didn’t work. It didn’t happen.’”

It didn’t. And with yet another reboot now under way — some might even call it a rebuild — Stafford decided it might be time to move on. The club has agreed, and is expected to deal the soon-to-be 33-year-old sometime before March 21, when Stafford is owed a $10 million roster bonus.

Stafford will count $19 million in dead money against next year’s cap, a savings of $14 million. Of course, the Lions also have to figure out who will be their starting quarterback for the first time since taking Stafford first overall in 2009. Chase Daniel and David Blough are the top quarterbacks left on the roster.