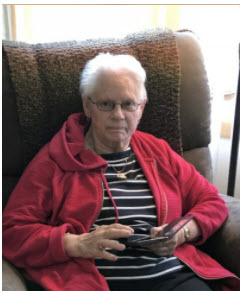 Barbara was born on August 3, 1942, in Lansing, Michigan, to the late Donald and Elsie (Adams) Perkins.  She graduated from Sexton High School and earned her Bachelor’s Degree in Education from Central Michigan University.  Barbara married Bruce Campbell on June 28, 1986, at the Central United Methodist Church in Sault Ste. Marie, Michigan.

Barbara was a teacher at Washington Elementary School for 31 years and held various positions on the local MEA – retired board.  She was a member of the War Memorial Hospital Auxiliary, and a volunteer at the Chippewa County Health Department, and Hospice of the EUP – Bell Hospice House.  Barbara was a member of the Central United Methodist Church, where she was part of the Rebecca Circle, and played in the Handbell Choir.  She was also an avid reader.

Barbara was preceded in death by her parents; her daughter: Heather Marie Powers; and her brother-in-law: Michael Campbell.
No public services will be held at this time. In lieu of flowers, memorials may be left to Central United Methodist Church or Hospice of the EUP.