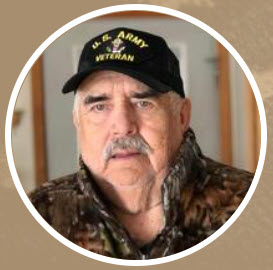 Cooz was born on August 23, 1939, on Sugar Island, Michigan to the late Wilford and Genevieve (McKerchie) Aikens. The family later moved to Algonquin where he made many of his lifelong buddies.

He served his country in the United States Army as a chauffeur for the commander and top brass in Germany. He was honorably discharged and returned home to Mishicot, WI. Soon after, he had two children (Genny and Ken) with his wife Helen (Spring). He spent his years in Wisconsin working in the factory, playing in the pool league, and playing card games with those who would become lifelong friends. In the early ’70s, his family returned to the Soo where they had their 3rd child, Michael.

In 1985, Cooz moved to Livonia, Michigan where he worked and retired from Schwarts Precision Gear. It was here that he found his favorite hockey team, The Red Wings.

He returned to the Soo and became a member of the American Legion Post #3. He was an avid fan of the AAA Indians hockey team and the Soo Eagles hockey club. His whole life he loved being with his family and friends listening to old country music, sing-alongs, snowmobiling, fishing, and driving “up the grade”. He also enjoyed horseshoes and his favorite activity of all, playing cards. Cooz was part of the Algonquin Cribbage League as well as the city league. Almost every day he had a time and place to play various games of Euchre, Poker, and Crazy Eight with his siblings, friends, nieces, nephews, and grandkids. His grandkids loved when grandpa would teach them how to play and he made it so much fun! In his last few years, he still loved to take country drives and adventures on the side-by-side at camp. He looked forward to daily visits to family and community.

He is survived by his children: Genevieve (Ron) Kaunisto of Dafter, MI and their children Ron (Jess), Jeremy (Rebecca), Ellen and Amy Kaunisto, Kenneth (Tonya Joss) Aikens of Sault Ste. Marie, MI, and his children Corin (Charlie), Andrea, Taylor, Kaleb, Tessa Aikens, and Abriella Miller, and Michael Aikens of Nashville, TN, and his son Nicholas Aikens along with 4 great-grandchildren with one more on the way.  He is also survived by his siblings: Dorothy Gervais, Bernard Aikens, Louie (Judy) Aikens, Paul (Mary Beth) Aikens, Ted (Laura) Aikens, May (Slim) Lockhart, and Fauncy (Skee) Sawasky all of Sault Ste. Marie, MI, and many special nieces, nephews, and cousins.

He will be lovingly missed.

A graveside service with military honors is being planned for Spring 2021. Contributions can be made to Hospice of the EUP or your favorite organization in his memory.