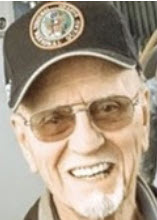 Verne was born on September 3, 1934, in Wells, Michigan to Vernon and Eugenia (Peterson) Coutant.  He graduated from Sault High School with the Class of 1952.  Verne attended Michigan Tech – Sault Branch, and later earned his Bachelor’s Degree in Education from Western Michigan University. On July 24, 1958, he married Violet Niskanen in Sault Ste. Marie. He served his country in the Army National Guard for 26 years.  He was a member of the American Legion Post #3, and the Christopher Columbus Hall.  Verne enjoyed golf, playing cards, going to the casino, and he loved going to the Hendrie River Hunting Camp, which was established in 1946 by his father, Vernon.

Verne was preceded in death by his parents and wife: Violet Coutant.

Due to the current health crisis, a celebration of Verne’s life will be scheduled at a later date. In lieu of flowers, donations may be made to the Wounded Warriors Project or Disabled American Veterans. The family would like thank the staff at War Memorial Hospital for their care of Dad and their support of the family.