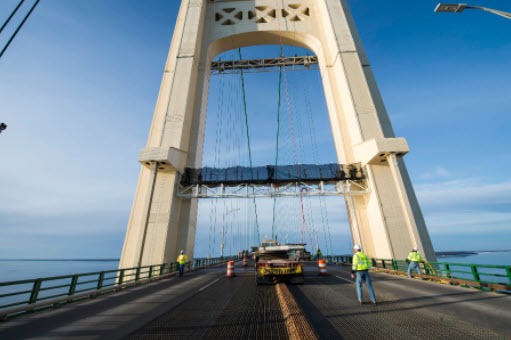 The Mackinac Bridge tower painting project has won yet another national award, this time from the National Council of Structural Engineers (NCSEA).

Ruby+Associates of Bingham Farms was named the Outstanding Project Winner in the Other Structures category of the NCSEA’s Excellence in Structural Engineering Awards. The firm designed the movable painting platforms being used in the Mackinac Bridge’s back-to-back two-year tower painting projects.

“The judges were impressed by the solutions provided for the unique challenges on this project,” said Carrie Johnson, chair of the NCSEA Awards Committee. “The engineers were tasked with creating a painting platform. This was a two-story, movable steel and aluminum structure capable of sustaining 100 mph winds. The solution eliminated the need for almost 400 feet of scaffolding.”

“These multiple awards recognize the engineering knowledge and problem-solving creativity of the firms involved, evident from the excellent job they’ve done repainting the Mackinac Bridge towers,” she said.

Back in March, Ruby+Associates received one of five Engineering Honorable Conceptor Awards from the American Council of Engineering Companies of Michigan (ACEC/M) at the association’s annual Engineering and Surveying Excellence Awards Gala.

Earlier this year, representatives of Seaway Painting of Livonia, the contractor performing the work on the bridge, accepted the E. Crone Knoy Award from the Society for Protective Coatings, an industry group focused on protecting and preserving concrete, steel, and other industrial and marine structures. The E. Crone Knoy Award “recognizes an outstanding achievement in industrial or commercial coatings work that demonstrates innovation, excellence in craftsmanship, or the use of state-of-the-art techniques or products to creatively solve problems or provide long-term service.”

The south tower contract is for just less than $6.5 million, and work is expected to be completed in early 2021. The contract to repaint the north tower was just less than $6.3 million. Installation and removal of the platforms has required brief closures during the overnight and early morning hours on several occasions.

The original paint is lead-based and Seaway is required to contain 100 percent of the paint as it is removed and ship it to an appropriate landfill facility. The new paint, which is zinc-based, is expected to last at least 35 years, with periodic maintenance.