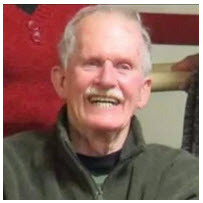 David grew up in a military family that brought him to many places and gave him many experiences. One of the most interesting was his time living on the island of Guam. That military life brought David’s family to settle in Pickford, Michigan, where he met his high school sweetheart, then bride, Patricia Jeske. The two raised four beautiful children in Sault Ste. Marie and then moved to Sugar Island, Michigan in the mid- 90’s where they have enjoyed island life ever since.

David enjoyed hunting and fishing. Each fishing trip taken with his son-in-law Harold or his many fishing buddies usually resulted in a story or two filled with humor. One of the best parts of island life for David were his many friends and feeding his band of ducks that he would call to the yard with his unique “quack”. To his great grandkids he was known as “Papa Duck”. He also enjoyed talking to and feeding the two Sand Hill Cranes that returned each spring. They trusted him so much they would venture up onto the deck to knock on the sliding door. This resulted in replacement of two or three screens throughout the years. David enjoyed the peacefulness of the river in front of his house and mowing the lawn on his tractor after dark.

Relatively early in life, David became owner of Soo Imports Volkswagen dealership in 1974 where he had been the General Manager since the mid 60’s. Cars were an everyday part of life and while growing up, all four of his children learned to drive a stick shift pretty well, even before they were able to legally drive. And recently, when David took his favorite little car to a Valet, he became aware that most young people of today never learned to drive a stick, so he offered to teach them, which made him smile.

At its infancy, David was part of the car dealership “Coffee” group that had the vision of a five-hundred-mile snowmobile race. He was part of the original work crew to build the track that became home to the International 500 and went on and qualified in the first couple of races. He often boasted about still holding records at the Soo I-500 Track. “First driver out”, inaugural race of 1969, “Slowest qualifying time”, when he blew the track on his machine, then pushed it across the finish line. And the “Shortest race ever run” (¼ mile), where he blew the engine at the start under the bridge.

David and Pat enjoyed camping and traveling. They visited Hawaii, Japan and Germany and took their children to Florida every year and traveled along the Eastern Coast of the U.S. when they were young. David especially enjoyed annual camping trips with the Jeske Family, to which he was referred to as “Favorite Uncle Dave”. David loved to play cards with his friends on Thursday nights, but we never heard if he won. He was a member of the First United Presbyterian Church, a Past Worshipful Master of Bethel 358 of the Masonic Lodge of Michigan and was Associate Patron of the Sault Ste. Mare Chapter #82, Order of Eastern Star. After graduating from Lake Superior State University late in life, David enjoyed his career as an Attorney, graduating from Thomas M. Cooley Law School in 1985 and was a member of the Michigan Bar Association. He especially enjoyed the work he did with the Sault Tribe youth via Tribal Court.

David has been cremated and his ashes will be with Pat until they are together again. A celebration of life will be held in warmer weather this summer as he hated the cold. David requested that friends and family come with a story to “Roast” him and enjoy the many “Dave Whyte” stories that will be told. As a father, David always told the kids and grandkids about a hidden treasure, adding that there might even be a map. Of course, the kids and grandkids always asked where the treasure was buried. During his last days, it became very apparent that each of them were a treasure, time with loved ones is a treasure, memories you create and experience share with a love one is a treasure. It’s not the X on the map.

In their golden years, David was an excellent caregiver to his wife Patricia through a serious illness and again in protecting them both from the threat of COVID. Words cannot describe the wonderful care the War Memorial Hospital Family provided to David and his loved ones throughout David’s cancer journey. The family would like to thank all staff, but especially Dr. Chander and his office staff, Dr. Jensen, Chelsea and Oncology Staff and the Road to Recovery volunteers.

The family has asked that each of you consider supporting the frontline and essential workers at War Memorial Hospital and in our community. Whether it be gift cards that support local businesses, sending holiday cookies, a meal to their home or work, or cards of support and thanks while they fight this battle against Covid-19.