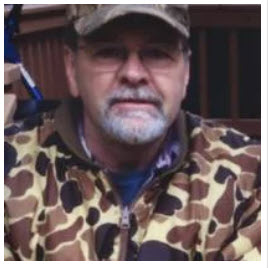 Jason grew up in Lincoln Park, Michigan. He graduated from Lincoln Park High School and had played hockey for Ecorse High School. He married Lorraine Demyanovich on October 11, 1976 and they raised two children in Southgate, Michigan. Jason was a truck driver who drove concrete delivery trucks in Trenton, worked as an over the road truck driver for Leaseway, Dana, Ryder, and DHT trucking companies.

Jason enjoyed hunting, fishing, and spending time outdoors. For a time, he fished salmon in Harrisonville, Michigan. He especially enjoyed duck hunting trips with his brothers to Munuscong Bay in the Upper Peninsula. When he couldn’t be outdoors, he liked to play videogames, especially Call of Duty Zombies, and taking trips to casinos.

Jason was preceded in death by his father, George J. Lucas, and sister, Nancy Wigginton.

A memorial gathering will held at a later date.

Interment will be in Edgewood Cedar Cemetery in Cedarville.

To send flowers or a memorial gift to the family of Jason Kenneth Lucas, Sr please visit our Sympathy Store.