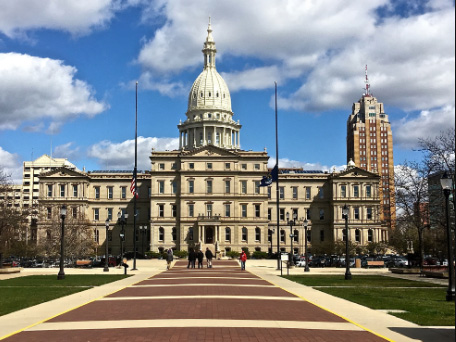 LANSING — Complaining Gov. Gretchen Whitmer is “neutering” lawmakers, the Michigan Senate on Thursday passed a bill that would require legislative approval to extend new and existing emergency orders beyond 28 days.

Capping a week in which the state House was unable to meet because of the virus, the GOP majority passed legislation aimed at curtailing the Democratic administration’s power during the coronavirus pandemic.

Whitmer is sure to veto the legislation, should it pass the House and reach her desk by the end of the year, but Sen. Ed McBroom argued it was important to push back and assert authority that he argued has been “appallingly abrogated” by the administration.

“The very problem that this legislation seeks to address is that abrogation, is that emasculation, is that neutering that has happened to the legislature,” McBroom, R-Vulcan, argued before the party-line vote supported by all 22 Senate Republicans.

“We live in a society that is based on the consent of the governed,” he said, “one that is built on a foundation that when we have disputes, when we don’t know what we should do, we don’t just let one person make the decisions for us.”

All 16 Senate Democrats voted against the legislation.

“If anyone feels neutered in this body, it’s because they’ve neutered themselves,” said state Sen. Curtis Hertel, D-East Lansing, who argued Republicans have spent more time fighting the governor’s policies than developing proposals to fight a virus that has killed more than 10,000 Michiganders since March.

“It’s not about standing and telling us all the things you’re opposed to,” Hertel said. “At some point, you have to put out a plan to actually protect people.”

The debate punctuated a lengthy day of voting in the so-called lame-duck session that did include some areas of bipartisan consensus on the state’s COVID-19 response.

The Senate approved legislation to:

The proposal to limit the state health department’s authority exposing long-standing partisan divisions in the state Legislature, however.

In another party-line vote, majority Republicans rejected a Democratic amendment to codify a statewide mask mandate.

The Michigan Supreme Court in October struck down a 1945 law that Whitmer had used to issue emergency orders early in the pandemic, including a stay-home order she issued in April and relaxed in June, allowing most businesses to reopen in at least a limited fashion.

The conservative majority on the state’s high court expressed hope that Whitmer would work with the Legislature moving forward – and she has on some fronts, striking a bipartisan deal on a school restart plan in August and agreeing to various spending initiatives.

But the administration has largely continued to go it alone, using public health code orders from Michigan Department of Health and Human Services Director Robert Gordon to continue a statewide mask mandate and various business restrictions.

Most recently, Gordon has used orders to limit personal gatherings and to close indoor restaurant dining rooms, movie theaters and casinos through at least Dec. 20, a move that Republicans and business groups have complained about vociferously.

“Unelected and unaccountable DHHS bureaucrats should not, in perpetuity, be able to issue freedom-restricting and business-killing emergency orders that disrupt lives and threaten livelihood,” said Sen. Lana Theis, R-Brighton, who sponsored the 28-day time limit legislation.

“Instead of working with the Legislature and giving us the science, the governor has tapped the unelected bureaucrats who work for her in the state department to issue more confusing and contradictory orders.”

Sen. Erika Geiss, D-Taylor, said the legislation would do “little more than bog down a process where swift, intelligent actions grounded in science are warranted.”

Sen. Mallory McMorrow, D-Royal Oak, argued the GOP majority hasn’t done “anything” in 230 days of the pandemic but now has the “gall” to try and require public health experts to seek their permission after only 28 days.

“I don’t want to be a broken record here, but half of this Legislature is currently not here, shut down from doing its work, because this Legislature has failed to even get its own house in order,” said McMorrow, noting House cancellations prompted by an infected staffer and legislator exposure to Rudy Giuliani, the president’s personal attorney.

Senate Republicans released a COVID-19 response plan in April but never introduced legislation to adopt it. The House GOP in October proposed a plan that would allow county health officials to opt out of statewide rules and create their own if they had low case counts and virus spread.