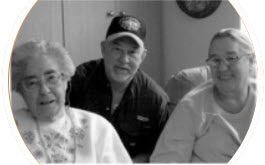 Elizabeth Mary “Betty” Harrison, age 97, of Sault Ste. Marie, Michigan passed away Wednesday afternoon, December 9, 2020, at Hearthside Assisted Living, which has been her home for the past 8 1/2 years.

Betty was born on May 22, 1923, in Sault Ste. Marie, Michigan the daughter of the late Paul and Julia (Witkowski) Paukette. On February 10, 1943, she married Harvey Harrison (of Pickford) in Flint, Michigan while he was on leave from the army.  They were a very giving couple and over the years they opened their home to many in need.  Betty worked for over 57 years as the “Avon Lady” in Sault Ste. Marie.

Betty is survived by two children: Randy (Bonnie) Harrison of Fruitland Park, FL and Laurie (Bob) Patterson of Brimley, MI; two grandchildren: Becky (Daniel) Dicus and Robert (Andrea) Harrison; and seven great-grandchildren: Harrison, Emerson, and Allison Dicus and Garrett, Tanner, Logan, and Drew Harrison. Betty was preceded in death by her husband: Harvey Harrison (1977), her parents: Paul and Julia Paukette; a step-father: Cecil Wilson; four sisters: Teresa (Leonard) Lindquist, Margaret (Mike) Fournier, Delores (Al) LaBelle, and Darlene (Dan) Perow; a brother: Paul (Sally) Paukette; and her father and mother-in-law: Percy and Edith Harrison.  Betty was also preceded in death by a brother: Donald (the twin of Darlene) two days after their birth. No public services will be held.  In lieu of flowers, memorials may be left to Hearthside Assisted Living.