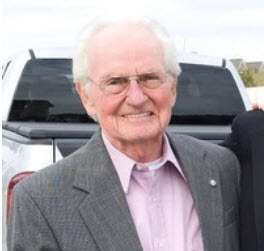 A long time resident of Sault Ste. Marie, Dave departed this earth on the afternoon of December 1st, 2020. He was born in L’Anse Michigan to Faye and Leatha Bryers on August 29, 1928. He was preceded in death by his former wife Helen L. Bryers, son Sam E. Bryers, brothers Verne, James, Alan and sister Betty.  He is survived by sisters Nina, Wilma and Winifred. Surviving children David M. Bryers, Mary M. Pauly and Steven J. Bryers; 9 grandchildren and many great grandchildren.

Raised in McMillan, Michigan, Dave spent much of his time hunting and fishing with his brothers along the Tahquamenon River. At the age of 14, Dave worked on the construction of the Soo Line Railroad and at the age of 16, as a Great Lakes Sailor shoveling coal into the steam fired engines. The majority of the money that he earned was sent home to his widowed mother to assist with the upbringing of his younger siblings.

In the early 1950s, Dave and his young family located to the Soo where he was employed as an Air Traffic Controller with the Civil Aeronautics Administration, Flight Service Station at Sanderson Field. Some 20 years later, the Flight Service Station in the Soo was scheduled for decommissioning and Dave was faced with relocating his family from the “Soo” that had truly become his home (none of his children wanted to move). In order to remain in the Soo, Dave was able to transfer his government service to the International Bridge where he was employed as an U.S. Customs Inspector until he retired with over 40 years of government service.

Over the years, Dave was active in the Sault Amateur Hockey Association, The Fraternal Order of Police International Lodge #115, and a life time member of the VFW Post 3676 and American Legion Post #3. An avid photographer, Dave has taken literally thousands of photographs of sailing vessels passing in front of his home on the beautiful St. Mary’s River, as he would say “The Gem of North America”

A special thank you to John and Terri Ferroni for all of their love.

Until we meet again

Due to the current public health crisis, a celebration of Dave’s life will be scheduled at a later date.  In lieu of flowers, memorials may be left to the Wounded Warrior Project or Disabled American Veterans.