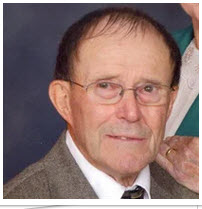 Russell Elmer McDowell, age 90, of Sault Ste. Marie, Michigan, formerly of Pickford, Michigan, passed away November 1, 2020, at home surrounded by his family. He was born on October 15, 1930, in Pickford, to Orton Leonard and Mary Matilda “Gladys” (Wilson) McDowell.

Russell was born and raised on the family farm on Pealine Road in Pickford. He eventually raised his own family on the same farm, after marrying Arla Mae McConkey on June 9, 1954, at the Pickford Nazarene Church. They enjoyed 66 years of marriage, living on the farm until moving to Sault Ste. Marie in 2008.

Russell graduated from Pickford High School in 1948. He had various jobs in addition to farming, including working on the Soo Locks and the Pipeline Across the Straits of Mackinac. He worked at the Cedarville Quarry until retiring in 1992 and then began farming full time.

Russell was a member of Central United Methodist Church.

Russell always kept himself busy working on something and enjoyed spending time with his family.

A private family service will be held at a later time.